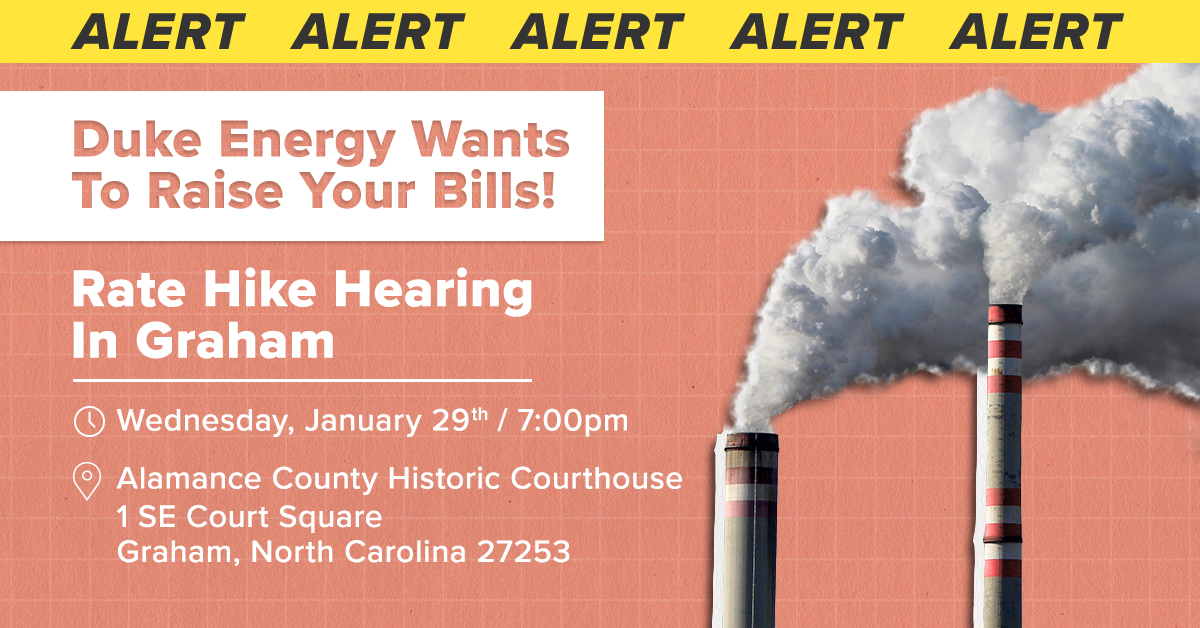 Duke Energy expects YOU to pay more while they reap the profits! Just say NO to Rate Hikes for Dirty Energy and Cleaning up Duke’s Coal Ash Pollution

Duke has asked the NC Utilities Commission to increase electric rates for residential customers by at least 6.7%. This would add a burden of at least $100 per year for a customer who uses 1,000 kilowatt hours (kwh) per month. (An average NC home uses about 1,100 kwh/month.)

Why this rate hike is unfair:
Duke paid ZERO income tax in 2018, while paying their top 5 executives over $150 million and paying a total of $16 billion to shareholders. Yet they don’t expect to pay to clean up their own coal ash pollution OR invest in a clean, climate-safe energy future!

If Duke’s insurers won’t pay to clean up their coal ash mess, why should you? – Duke’s insurance companies refuse to cover costs related to coal ash liabilities, because Duke KNEW of the risks and spreading contamination, but they failed to take reasonable measures to avoid the damages.
– A 2018 rate hike has been appealed to the NC Supreme Court, which has not yet ruled on whether Duke will be allowed to recover coal ash cleanup costs from ratepayers.

Pay more for DIRTY energy?
– Instead of investing in truly clean energy like large-scale solar or wind, Duke retrofitted two coal plants to burn coal and natural gas. Duke wants you to pay for this irresponsible decision that cost $278 million.
– The shift from coal to natural gas at Duke’s remaining NC plants, is NOT a clean or climate protective choice. Gas fired power plants burn mostly methane, a greenhouse gas 86 times more powerful than carbon dioxide. They leak unburned methane as well as the pipelines that supply them—a major climate impact!

Rate increase for unnecessary grid upgrades?
– “Modernization” of the grid shouldn’t include costly projects such as underground wiring, Duke should be helping North Carolinians shift to renewable energy, lowering energy bills and reducing environmental and climate impacts at the same time.