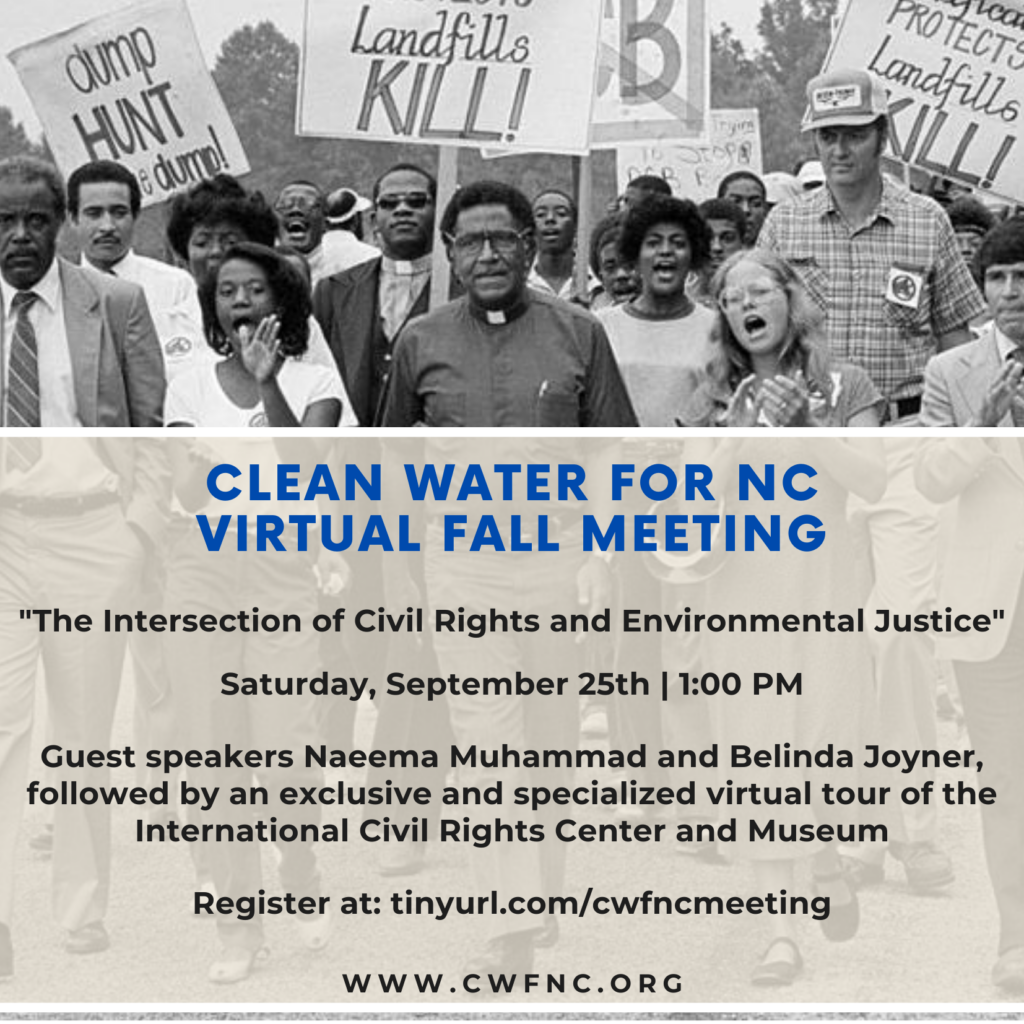 View the Meeting Program!
Receive a Recording of Our Fall Meeting!
Although ticket sales have ended, you can still receive a copy of our Fall Meeting recording by following the instructions on our Eventbrite page

Clean Water for North Carolina (CWFNC) is a community-based Environmental Justice nonprofit organization established in 1984, focusing on threats to environmental health, quality of life, and social justice.  We work with rural, low-wealth, and BIPOC communities through strategic and technical assistance, policy advocacy, and grassroots community organizing to protect and improve health, water, and air quality.

This year’s Fall Public Gathering is virtual and CWFNC is presenting “The Intersection of Civil Rights and Environmental Justice” with some exciting guest speakers, Naeema Muhammad and Belinda Joyner, followed by an exclusive and specialized virtual tour of the International Civil Rights Center and Museum!

Our Fall Meeting is open to the public free of charge! We are also offering a virtual tour of the International Civil Rights Center and Museum located in Greensboro for $20. Just follow the registration instructions to register for our Fall Meeting and the optional virtual museum tour.

About our Fall Meeting guest speakers:

Naeema Muhammad has worked as the Community Organizer for the North Carolina Environmental Justice Network (NCEJN) since 2001, leading state-wide efforts and supporting grassroots efforts for environmental and social justice. Since 2014, she has served as Organizing Co-Director of the NCEJN. She is also a founding member of Black Workers for Justice in N.C., a community-based organization founded in 1981 that addresses workers’ rights issues.

Muhammad has worked on two National Institute of Environmental Health Sciences-funded grants: The Community Health and Environmental Reawakening project, where she served as the Community Organizer and worked with communities adjacent to industrial hog operations; and the Community Health Effects of Industrial Hog Operations project, where she worked as the Community Organizer, Environmental Justice Educator, and Interviewer, and assisted her collaborators in qualitative data analysis. She has co-authored many publications with Dr. Steve Wing of the UNC-CH School of Public Health regarding community-based participatory research, most recently published in the New Solutions Health Journal.

Belinda Joyner is the Northeast Organizer of Clean Water for NC since the early 1990s. She grew up in Northampton County and has worked as a teacher’s assistant specializing in reading skills. She has been involved in numerous local environmental struggles and founded the Concerned Citizens of Northampton County. She has been an effective organizer against threats including a liquid fertilizer plant, a hazardous waste incinerator, a private prison, and the Atlantic Coast Pipeline using Title VI challenges against the pipeline. Joyner has a strong, decades-long history of grassroots organizing for diverse causes.

The federal Civil Rights Act of 1964 prohibits discrimination on the basis of race, color, religion, sex or national origin. It was the first step to legally-required equal treatment of all individuals, though it was not a magic fix-all. While the civil rights movement roared in the 1960s and ‘70s, the US also experienced a booming environmental movement leading to the passing of the Clean Water Act (1972), Clean Air Act (1963), Endangered Species Act (1973), and so many more. However, the two worlds did not really intersect as Civil Rights and Environment were treated as two separate movements and often composed of very different groups of people.

The two were merged and “environmental justice” was sparked two decades later, when the term was coined during the 1982 protests in Warren County, NC, when a grassroots effort worked to block a PCB-laced landfill in one of NC’s poorest counties, with a supermajority of African-American residents. Fast forward to 2021, and we are still seeing how BIPOC, rural, and low-wealth communities are treated as “sacrifice zones” and carry an inordinate share of the pollution burden.

We will discuss this intersection, discuss present day sacrifice zones, the EJ movement, and the application of Title VI of the Civil Rights Act. Our guest speakers have decades of direct experience in the environmental justice movement and will share their experiences, lessons learned, and what work still remains.