Concentrated animal feeding operations (CAFOs) are the main, industrialized method of producing animal products in the US.

Neighbors of such operations, often rural, low-income communities, can experience air quality issues and well water impacts some of which have yet to be documented in any official manner.

Overapplication of animal manure as fertilizer can lead to buildup of nitrogen and phosphorous, which can run off or leach into adjacent water sources. Groundwater contamination from CAFOs could be negatively impacting nearby households that depend on private wells for safe drinking water. 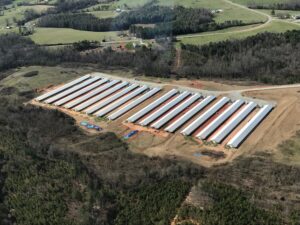 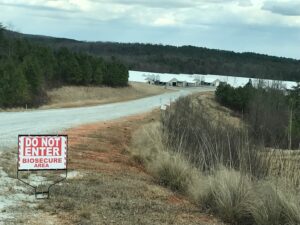 Here in North Carolina, concentrated animal feeding operations (CAFOs) have been around for decades, with pollution and impacts exposed first from the swine industry but increasingly with the poultry industry.

Community members living near these industrial operations, along with the workers employed by meat processing facilities, face the brunt of the health and environmental impacts posed by factory farming.

The swine industry shifted from small farms to more concentrated production in the 1990s creating environmental and health concerns for nearby community members. Organizations such as the North Carolina Environmental Justice Network and Sound Rivers took an early lead in the fight to protect communities located near these hog operations, who are disproportionately low-income and minority.

One major concern with swine production is the use of the outdated lagoon and sprayfield system. This form of waste management flushes hog excrement into a large pit, known as a lagoon, and then sprays the collected liquid onto nearby fields.

For the neighbors of these operations, the odors and health concerns attributed to the lagoon and sprayfield system can be unbearable and make their homes unlivable.

Community members took legal action due to the injustice and documented problems associated with this waste management practice. Yet despite securing an agreement from the industry’s biggest producer to transition to superior technology, this system has been further cemented in place by the push for renewable natural gas, commonly referred to as biogas. Under a general permit, hog operations can choose to add covers over their lagoons to create and capture methane. This biogas can then be directed into pipelines for transportation or used on-site for electricity.

In 2019, it came to CWFNC’s attention that poultry operations were spreading across North Carolina at an alarming speed.

Our state agencies are not only lax with regulating these facilities, but they do not know where or how many currently exist.

The poultry industry raises a variety of questions regarding the well-being of people and the environment. According to USDA census data, when evenly distributed, the average broiler CAFO in North Carolina sells nearly half a million chickens for meat annually.

The waste generated by these millions of animals and spread without measure on nearby land is certainly cause for concern.

Unique to the poultry industry is its waste management system, which, for broiler chickens, usually incorporates a dry “litter” that is either stored in piles or spread on crops as fertilizer. This industry also heavily relies on contracting farmers to raise their poultry, all while owning and operating all other aspects of production—a process known as “vertical integration.” Only a select few poultry companies dominate the industry, often leaving farmers with no alternatives for contracted employment in many places across the country.

In addition to factory farms, industrial animal agriculture relies heavily on a BIPOC and immigrant workforce to operate processing facilities, such as chicken hatcheries and meatpacking plants. These facilities cannot be ignored when addressing the Environmental Justice concerns of industrialized animal agriculture. Workers’ health and safety are often compromised by repetitive tasks, acute injuries, and diseases, including outbreaks like COVID-19.

CWFNC continues to collaborate with other organizations and community members to build a more equitable, environmentally sound animal agriculture system in NC. To get involved, sign up for our monthly news alerts, consider volunteering, and check out our Community Science program for environmental monitoring efforts.