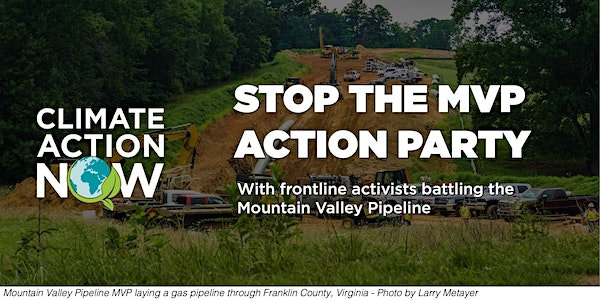 The International Energy Agency has concluded that there must be no new oil, gas or coal development if the world is to reach net zero by 2050.

Our featured guests will brief us on what’s at stake and guide us through concrete actions we can take to help stop the MVP and side deal during the party with the free Climate Action Now app.

Why September 6th? The timing is critical. First, activists will assemble at Congressional offices on Sept. 8 in Washington D.D. to lobby against the MVP and we want them to walk into offices that have already heard from a LOT of people opposing the project. Also, rumor has it that the “Manch side-deal” will be voted on by the end of September as part of the budget package. So, we need to quickly ramp up our efforts to stop it.

About the Featured Guests:

Crystal Cavalier-Keck is the co-founder of Seven Directions of Service with her husband. She is a citizen of the Occaneechi Band of the Saponi Nation in Burlington, NC and Chair of the Environmental Justice Committee for the NAACP.

Jessica Sims is the Appalachian Voices Virginia Field Coordinator. Born and raised in Central Virginia. Jessica is has worked extensively with Chesapeake Climate Action Network and the Sierra Club Virginia Chapter on their pipeline campaigns.