Posted on January 4, 2023 Categories: Latest News Comments are off for this post 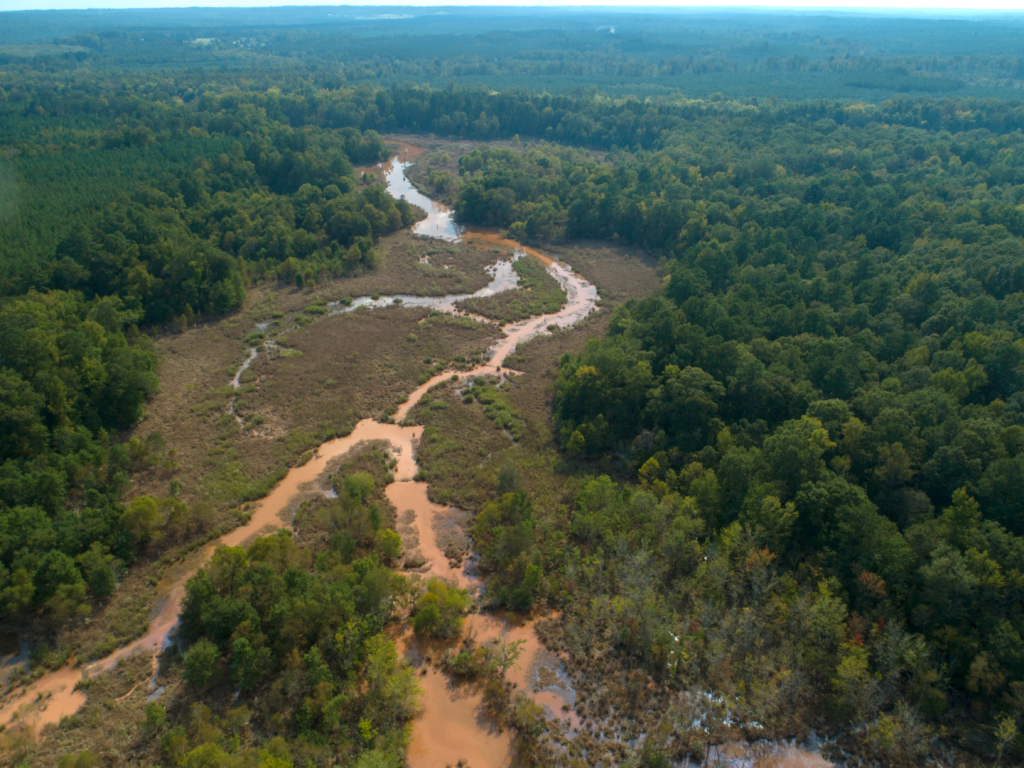 The Haw Riverkeeper routinely monitors sediment running off cleared land and into Gulf Creek, which feeds the Haw River. This picture was taken in September 2018. (Photo: Peter Theye)

With stands of loblolly pine, rivers, creeks and expanses of farm fields, southeastern Chatham County feels like the country. But this neck of the woods is home to many polluting industries: Arauco, a wood products company with a history of air quality violations; the Shearon Harris nuclear plant; the former Brickhaven mine, where 7.3 million tons of coal ash is buried in lined cells; Duke Energy's now-defunct Cape Fear coal-fired power plant and an associated STAR facility, which burns the old fly ash for use in cement.

Now a mega-project east of Moncure and near the Chatham-Wake County line would fill in wetlands and streams -- in an area already prone to water pollution.

VinFast, an electric car manufacturer, plans to build a factory on 1,300 acres of forested land, currently used for timbering, near Old US Highway 1 and Corinth Road. It is expected to create 1,700 jobs and generate millions of dollars in tax revenue to the area.

"The VinFast project is an enormous site in Chatham County, with a mission to increase electric vehicles and reduce carbon emissions," Haw Riverkeeper Emily Sutton said. "But this company that has touted an environmental conscience has submitted a proposal that would destroy thousands of feet of streams, cross the Haw River, and permanently fill dozens of acres of wetlands." 17 -- number of streams within the site, totaling six linear miles

7 -- of those wetland areas rated as "high" quality

23 -- of those wetland areas rated as "medium" quality

Half mile -- length of stream channel filled in by those roads

23 -- acres of wetlands, about the size of five Walmart Supercenters, within hardwood forests that would be destroyed by the road projects, plus one acre of pond

135 -- Age in years of  Merry Oaks Baptist Church, which, as the Chatham News & Record reported, would have to be uprooted and moved to accommodate the roads

15.75 -- miles of new sewer extensions that would run from Sanford to provide utilities to the factory

10.8 -- miles of new water lines from Sanford to the factory

54.4 -- acres of wetland that must be mitigated as a result of the site, road and utility projects, plus another 7,022 linear feet of streams, equivalent to 1.3 miles

How mitigation works: The Clean Water Act requires developers of residential, commercial, transportation and energy projects to offset “unavoidable impacts” to streams or wetlands. They usually accomplish this by buying “credits” from the state Division of Mitigation Services (DMS) or private mitigation banks, of which there are roughly 20 in North Carolina.

DMS and the private banks generate and sell the credits by restoring, preserving or creating environmental projects in advance within the same watershed. They use the fees in part to fund additional mitigation projects for future projects.

In addition to US Army Corps of Engineer approval, the development, including the roadways, must receive several permits: