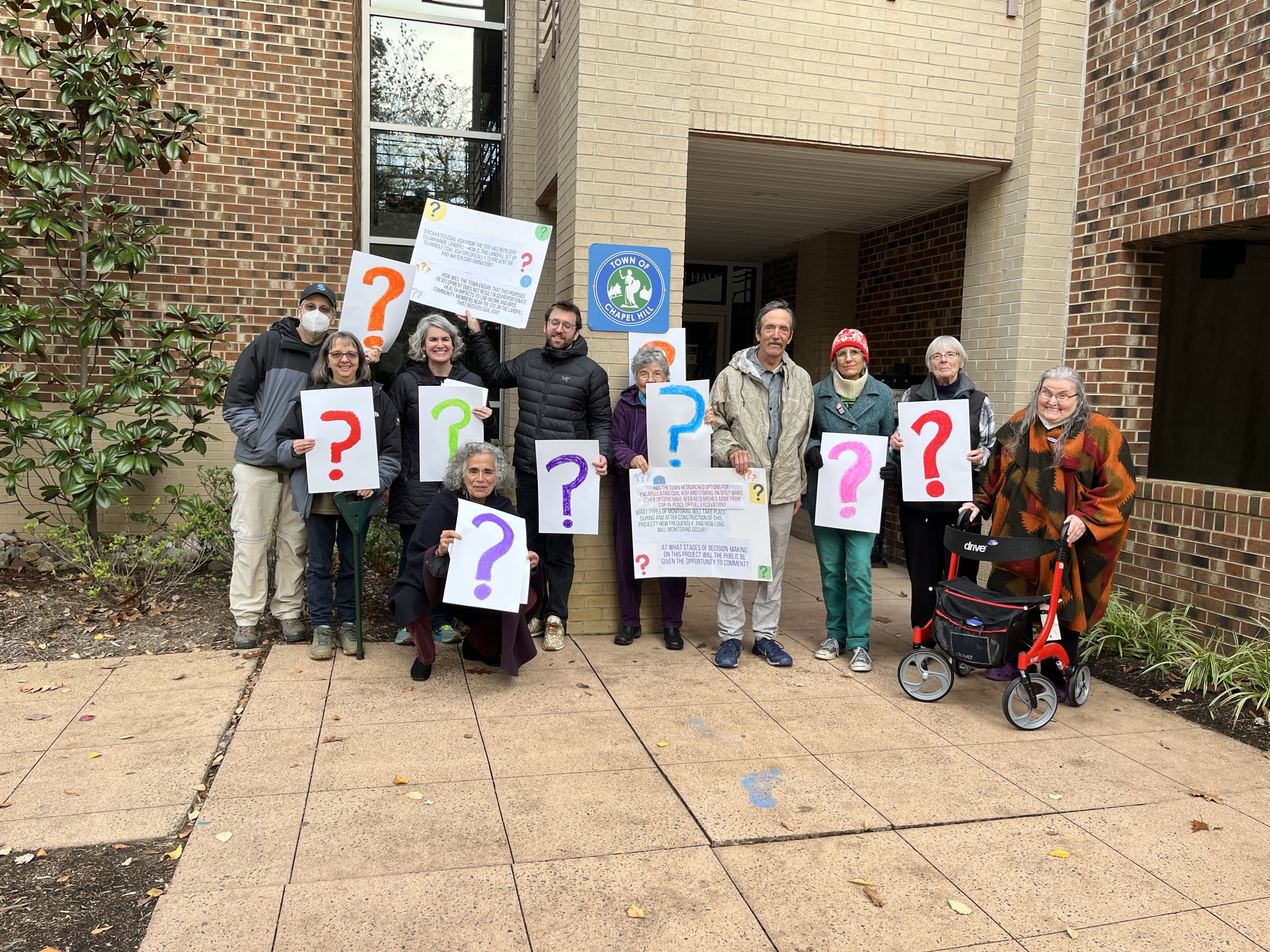 828 Martin Luther King Boulevard is the location of a police station and 60,000 cubic yards of coal ash waste in Chapel Hill. The Town acquired the property after coal ash waste was already deposited, and discovered it in 2013.The Town’s plans for remediation uses the cap and contain approach, which includes some ash removal and off site disposal, capping with 3-4 ft of clean soil, a retaining wall and restricted use of groundwater.

In May, the Town hosted a meeting which included town staff, environmental consultants, and DEQ’s Brownfields program, where the town promised to answer questions from the public. 73 members of the public, which included neighbors, local and statewide coalitions of coal ash-impacted community members, and clean water and air advocates, were allotted only 30 minutes to address these concerns and questions. Some answers were given during the meeting, while other questions would require additional research and consultation, but all were promised to be given written responses what would be posted on the Town of Chapel Hill’s Website.

We waited SEVENTY days for the Town and DEQ to post these responses, and even when they were posted, less than half the questions were answered and many were essentially evaded, overgeneralized, or pushed to future decisions in later stages of the project. The ACT group asked 34 questions. Only a couple were answered during the meeting, and none on the response document. These included questions about housing considerations, public participation, coal ash clean up and management procedures and worker protections, and reporting and monitoring.

In September, the Town posted a status update which considers a phased approach where “Under this plan, the Town would begin moving ahead with site remediation and construction of the MSC now with steps taken to allow for future development (commercial, office, or housing) on the remainder of the site at a later time.” (Status Update Town of Chapel Hill).

However, the Town has yet to discuss this during a Public Regular Council meeting and answer questions we’ve been asking for FIVE months now.

Our questions and concerns remain:

How will the Town ensure that this proposed development does not result in disproportionate health impacts to low-income and BIPOC community members near the site or the landfill that receives coal ash?

Has the Town researched options for encapsulating coal ash and storing on site? What other options have been researched aside from cap-in-place or full excavation?

Excavated coal ash from the site has been sent to Uwharrie landfill - how is this landfill set up to handle coal ash specifically to prevent air and water contamination?

What types of monitoring will take place during and after construction of this project? How frequently, and how long will monitoring occur?

At what stages of decision-making on this project will the public be given the opportunity to comment?

“I grew up in a rural, coal ash frontline community that is spread far from the landfills and the power plant. However Chapel Hill is a densely populated area with the landfills and power plant nestled in the midst of neighborhoods. This close proximity needs to be addressed. By putting people in harms way at the 828 MLK Location, either through housing, a work environment, or recreation of the proposed gathering place, the Town is placing an unfair burden on individuals, parents, and the greater community who serves the citizens of Chapel Hill: the health care system, teachers, police officers who risk personal exposure at work and will have to address the needs of individuals dealing with related mental health issues.”

“The town has a chance to deal with the problem in an ethical manner that respects the nearby community, and protects the health of the community. With coal ash, and the many toxic components, the usual solutions are: 1. Sweep the problem under the rug and bury or simply cap the ash. 2. Ship the problem away and dump the coal ash on another community - usually one that is low income and/or disproportionately composed of people of color. With the coal ash that has been currently been excavated from the police station grounds, unfortunately Chapel Hill has chosen to ship the ash away with little concern for the environmental and engineering designs of the new dump site. We want to raise several questions about the Uwharrie Landfill which was selected for receiving the coal ash.

Please use science, community involvement, and transparency in your on-going deliberations about how to resolve the coal ash problems.”

“Though the Chapel Hill Town Council directs the public to its website for information about coal ash, and though we are invited to make comments on that site, I am concerned that the general public finds it too inaccessible, and the Council needs to have public forums regarding this very serious issue.”

“Despite there being no examples of successful residential redevelopment projects constructed on coal ash sites, the town has failed to answer questions related to reporting and monitoring of the site both related to human health assessments and water quality concerns.

In considering health concerns, during the Public Meeting with DEQ on May 16th, when asked if the town or DEQ has investigated the cancer rates of the current and historical occupants of 828 MLK, DEQ responded that they were not aware of such an investigation, and that that investigation would fall under NC Department of Health and Human Services and that they had not been in contact with that department. Further, according to consultants, higher concentrations of metals were identified in some perched water zones where coal ash is present in the fill. However, we ask that if this site is not excavated and no lining is installed under the site, we ask what would prevent toxins at the site from entering Bolin Creek and traveling to Jordan Lake to contaminate that drinking water source? How would a retaining wall prevent infiltration?

We asked these questions and voiced these concerns during the public meeting and are still waiting for answers.”

“As a resident of Chapel Hill -- a voter and a taxpayer -- I expect the elected officials and institutions in my community to be open and transparent in their pursuit of our community's safety, health, and well-being. Too few of my neighbors and friends even know about the fact that coal ash is exposed on popular public greenways like Bolin Creek -- let alone that the town is considering development that could threaten more workers, families, and children. Experts and scientists much smarter and better informed than I am have outlined grave concerns about the Town's plans; they have posed some urgent questions to the Town; and every person in our community is entitled to adequate, prompt responses in forums and platforms that are accessible to everyone. To date, the Town has failed to comply with its basic obligations with regard to the coal ash threats in our community."

We ask for the Town to respond to urgent concerns and questions before moving forward with this remediation and redevelopment to protect the health and safety of neighbors and community members who are or will be impacted by the coal ash at 828 Martin Luther King Blvd.

Alliance of Carolinians Together (ACT) Against Coal Ash 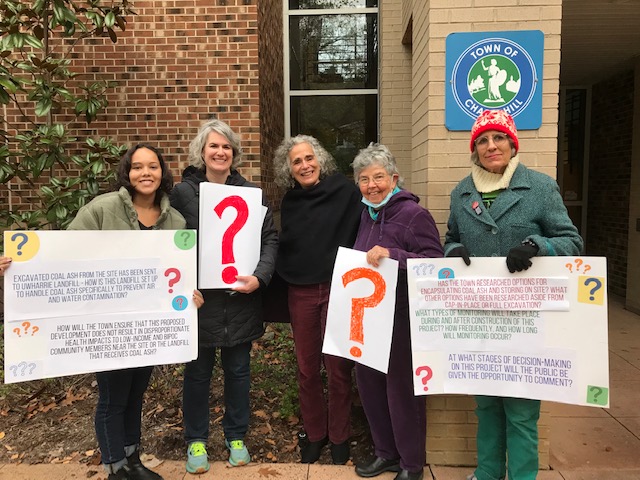 40 Years of EJ Wrap-Around: Thank You to Our Panelists & Video Recording!