Posted on February 7, 2022 Categories: Latest News Comments are off for this post 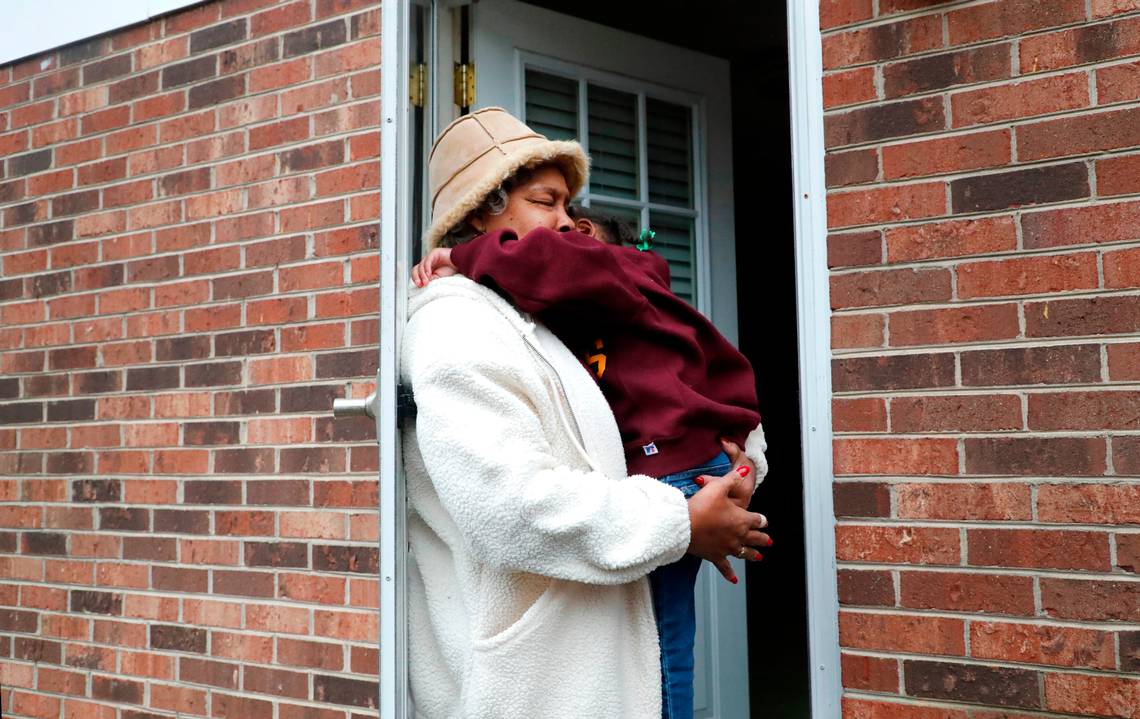 Ruby Gordon was already in bed last Monday night when she got the first call notifying her to evacuate her home in northern Winston-Salem.

The call was related to a fire at the Winston Weaver fertilizer facility on Cherry Street, about three-quarters of a mile away.

More than 500 tons of ammonium nitrate were in the Winston Weaver plant when the fire started on Jan. 31, with roughly 100 additional tons on a railroad car at the site. The common fertilizer ingredient can explode if it comes into contact with wood, paper or other compounds.

It has been linked with multiple deadly blasts in the United States, including a 2013 explosion in West, Texas, that registered at 2.1 on the Richter scale, killed 15 people and injured more than 250. A car loaded with two tons of ammonium nitrate exploded in Oklahoma City in 1995, leveling the Alfred P. Murrah Federal Building and killing 169 people.

When Gov. Roy Cooper addressed environmental justice in an executive order last month, it was geared toward neighborhoods like Gordon’s.

According to the Environmental Protection Agency’s Environmental Justice Screening and Mapping Tool, about 51% of the roughly 6,500 people who live within a mile of Winston Weaver are Black and 26% are Hispanic. The per capita annual income in the area is $17,423, well short of Forsyth County’s $30,769.

Cooper’s Executive Order 246 called for “meaningful, fair and equitable public engagement” to “avoid and remedy harmful impacts on communities most severely and frequently impacted by economic and environmental health.” It also discusses cumulative impacts — the idea that multiple pollution sources layer on top of each other to create more significant hazards.

Under the Dome newsletter News and insider information from the world of politics and government in North Carolina.

The community is bordered to the east by U.S. 52, a highway that was built through the city’s Black neighborhoods in the 1960s under the guise of eliminating what city leaders at the time called “blight.” R.J. Reynolds opened its Whitaker Park plant a mile southeast of Winston Weaver in 1961.

When it opened, the facility — which closed in 2011 — was considered the largest cigarette plant in the world. There’s an asphalt plant slightly southeast of the Winston Weaver plant, as well as a packaging facility. Immediately surrounding the plant are mostly small businesses — car repair shops, a staffing agency, the corporate headquarters of an independent wrestling company — with residential neighborhoods branching off of Indiana Avenue and Cherry Street nearby, typically made up of modest one- or two-story homes on large lots that belie the fact that this area was once considered out in the country.

Like Gordon, many of the thousands living within a mile of the plant had little to no knowledge that a facility posing risks like Winston Weaver existed in the middle of their neighborhood.

Adams also lives about three-quarters of a mile from the plant. She was sitting on the couch in her Marlowe Avenue home when she heard and felt the first explosion. About an hour later, Adams recalled feeling two smaller blasts rattle her home.

Adams, who has represented Winston-Salem’s north ward on the city council since 2009, said, “Most people don’t know. Not just my neighborhood, all neighborhoods. We like to think of things like a matrix: As long as I don’t know and somebody else is handling it, I’m good.” “But incidents like this open people’s eyes,” she continued, “to how much they don’t know and what little bit they should know.”

Joe Jackson, right, talks with Winston-Salem city council member D.D. Adams after a press conference in Winston-Salem, N.C., Thursday, Feb. 3, 2022. Jackson temporarily moved in with his mother to help take care of her while her community is part of the evacuation zone of Winston Weaver Company fertilizer plant fire.

Chenita Johnson lives on Patterson Avenue, two blocks outside the evacuation zone that stretched for a mile radius around the plant from Monday evening until Friday morning. Johnson has lived in the area for 40 years, but like Gordon had no idea about the quantity of ammonium nitrate being used at the site she routinely passes.

The clouds smelled like something burning and something else Johnson couldn’t place, so she retreated inside and kept all of the doors and windows closed. “When it came down Patterson it didn’t feel safe,” Johnson said. “We had to mask in the house.”

The Winston Weaver plant did not explode like the West, Texas, facility. Instead, firefighters fell back, letting the unpredictable substance burn up and monitoring the site via drones flown overhead. They now believe that much of the ammonium nitrate has burned away, or at least enough to let crews in hazmat suits move around the site, checking on hot spots and shifting rubble as clouds of white smoke from the warehouse’s remains billow around them.

The Winston Weaver facility included five buildings spread over more than eight acres, according to Forsyth County property records. On the western edge of the property was the nearly 48,000-square-foot warehouse built in 1939 and renovated in 1963.

There were also two smaller warehouses and an office building, each built later. Joe Jackson, whose parents bought their house in north Winston-Salem in the early 1970s, said the plant kept a low profile. He recalled peering over as he drove past to see a small blue sign identifying the facility, but nobody ever told Jackson or his parents what was happening inside.

“There was not any indication, no understanding of people that we knew that there was a place there that contained the storage of ammonium nitrate or any kind of chemical that could cause the disruption that this has,” Jackson said. During a Thursday briefing, Winston-Salem Fire Department officials said there have been “some minor incidents” at the site in recent years, including “a couple” of fires in electrical equipment and possibly a car fire in the parking lot.

The buildings did not have sprinkler systems and were not insulated, according to Forsyth County property records. When Winston Weaver’s first building was constructed in 1939, it was outside of city limits. Adams, the city councilwoman, said, “I had friends that lived out that way. It was farmland, chickens, hogs, country.

The plant was there, the community built up around the plant and it was annexed into the city. That’s no different than any city in America.”

Also like many cities in America — and especially in the South — the people who purchased homes in the industrial area immediately around the fertilizer plant were mostly Black. “Wherever you find factories, hazardous material, loud noise businesses, dry cleaning, automotive, anything that creates something that has chemicals, that’s where Black folks were forced to move to,” Adams said.

Segregation laws between 1912 and 1940 concentrated Winston-Salem’s Black population in East Winston-Salem and along what would become the U.S. 52 corridor, said Russell Smith, a geography professor at Winston-Salem State University. Even after those laws were struck down, Smith said, they continued to shape where Black people either could or chose to live.

“They’re forced into these spaces, one, because that’s the only part of the city that they can live (due to segregation), maybe feel comfortable in, have a sense of community. And then the second part is the economic aspect of where they could afford,” Smith said.

And one of the places where Black people could afford to live, especially after U.S. 52 displaced Black neighborhoods like Happy Hill and Belews Street, was around the Winston Weaver plant. Policymakers, Smith said, need to weigh the jobs and tax revenue offered by industrial facilities like Winston Weaver against the environmental consequences of having it in a community.

“Especially when they’re in such close proximity to thousands of people and when something does go wrong, those people are bearing the brunt of all of the advantages that the rest of society has benefited from over the decades that they’ve been in existence,” Smith said.

Executive Order 246, which Cooper signed in early January, recognizes that climate change has a disproportionate impact in communities where people of color and people who earn low incomes live. It acknowledges cumulative impacts and the importance of state government in addressing environmental disparities. The order calls for a public input process that could lead to additional executive orders addressing environmental justice.

Perhaps most tangibly, it calls for the appointment of an environmental justice point person in each Cabinet agency and public participation plans guiding how those agencies interact with communities that will be affected by their decisions. Jackson, who is caring for his 91-year-old mother, learned of the fire Monday evening when a relative called to ask if they were evacuating.

He turned on the TV and learned more about what was happening through the news media. He ultimately decided to stay put in the home, which was slightly outside of the evacuation zone. It was safer to take the chance that the plant would not explode, he said, than to risk taking his mother to a shelter in the midst of the COVID-19 pandemic.

As the smoke clears, Jackson and many others are left with a list of unanswered questions. “None of the whys were clearly explained to me,” Jackson said.

“Why it existed. Why would this plant be there with that quantity of ammonium nitrate without some kind of information shared with the people of this community. What to do and when to do it should something go wrong.”

Ruby Gordon and her husband, Harold, have lived in their Retnuh Street home since 1975. From the front porch of their three-bedroom ranch, it’s easy to gaze over a small valley and see and hear traffic from U.S. 52. When the first call came Monday night suggesting that they evacuate, the Gordons were already in bed. A few minutes later, the phone rang again, saying that an evacuation had been ordered. Still, the Gordons decided to stay.

“I said, ‘Well I’m just going to trust the Lord’s going to take care of me tonight and I’ll deal with it tomorrow,’” Gordon recalled on Thursday. “And then once I looked out and saw all the neighbors were still here, everybody was still here, so I said, ‘Well OK, we’re all going to take this together.’” Thursday afternoon, Gordon was babysitting her 4-year-old granddaughter, Gracelyn.

As Gracelyn watched cartoons inside, Gordon stood outside, saying the Winston Weaver plant should not be allowed to rebuild in its former location. “It should be in a place where if it catches fire or whatever it won’t harm anyone,” Gordon said, “especially because now we know what was all up in there, how much was in there. … So no, I don’t think it needs to be built back around here, around the neighborhood.”

Johnson, who smelled the smoke from her porch, believes the Winston Weaver plant would have relocated already if the parts of Winston-Salem that expanded around it over the last 80 years had brought white or wealthier residents.

At a minimum, she said, Winston Weaver would have had much lower quantities of ammonium nitrate on hand if it were in another part of the city. “I don’t think people really knew how dangerous this really is,” Johnson said. “I don’t even know how that was allowed, I really don’t.”