Posted on October 29, 2020 Categories: Climate, Latest News No comments yet 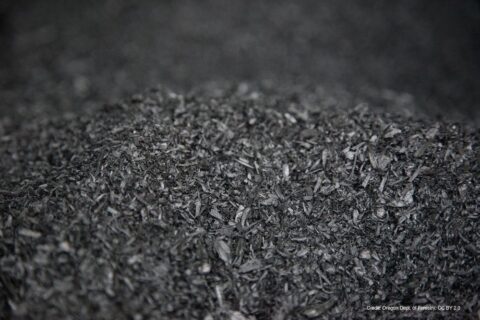 This story has been corrected to show that only one plant will be built. The second application has been withdrawn.

An industrial plant that would “cook” creosote-treated railroad ties and release tons of harmful air emissions are proposed for a predominantly low-income neighborhood near Hamlet, an area already burdened by pollution.

The facility International Tie Disposal, is owned by a railroad infrastructure company, Polivka International, based near Charlotte.

The plants would produce biochar, a shredded material often made of woody debris, lumber, grasses and animal bedding. The end product can be used to enrich soil and sequester carbon, which some scientists believe can help mitigate climate change.

Conversely, biochar can also be burned as fuel in power plants, such as the one at UNC Chapel Hill, which adds greenhouse gases to the atmosphere and drive climate change.

But the manufacturing process still emits pollutants, and adding contaminated railroad ties to the recipe is controversial. Creosote is a probable human carcinogen, according to the EPA. International Tie’s plants, which would be located adjacent to the CSX rail yard, would release carbon monoxide, nitrogen oxides and particulate matter, all of which can harm human health. Exposure to fine particulate matter has been linked to a person’s vulnerability to more serious COVID-19 illness.

The plants would also release toxic and hazardous air pollutants, including known carcinogens benzene, methylene chloride, PCE and TCE, according to the company’s air permit applications.

Basil Polivka II, CEO of Polivka International, told Policy Watch via email that his company has expanded into rail yard decommissioning, and the proposed facility will help alleviate the glut of railroad ties that can’t be reused. “There are not many options to dispose of them. Landfilling is not an option,” Polivka said.

Since both CSX and International Tie consume and dispose of millions of railroad ties, it likely would be cheaper in the long run to build a plant to process them than to dispose of them in a hazardous waste landfill, which can run $120 per ton.

Little is publicly known about the proposed facility, and even the air permit application to the state raises more questions than it answers — answers Hamlet residents hope to receive if they can persuade state officials to hold a public hearing.

“This reminds us of the early days of wood pellet plants when they were just winging it with their emissions estimates,” said Patrick Anderson, an attorney with the Environmental Integrity Project. “The thought of heating creosote-treated railroad ties needs to be looked at in-depth.”

The residents of nearby North Hamlet, where nearly two-thirds of the households are low-income, are concerned about the pollution and their health. “It’s going to be poisonous for our community,” said Chad Gardner, who with his wife, Lisa, live 500 yards from the proposed site. “First they pushed Enviva,” — the wood pellet plant — “on us, and now this.”

“Consumers are willing to pay more for one-time use on their grills than for one-time application in their gardens.”

Biochar is made using “pyrolysis,” which involves intense heat to change the chemical composition of the feedstock. Since there is no oxygen in the process, the material doesn’t catch fire, according to International Tie’s permit application.

However, Lou Zeller, executive director of the Blue Ridge Environmental Defense League, said pyrolysis at the proposed facility still involves burning, or combustion. Natural gas — also a contributor to climate change — would be used to start the pyrolysis process. And creosote itself is flammable. “They say they’re not burning the material,” Zeller told Policy Watch. “But there’s a lot of combustion going on.”

Brown said emissions from the manufacturing process need to be run through a thermal oxidizer — in other words, combustion — to “eat the smoke” that would otherwise be released to the atmosphere.

International Tie would use a “slow pyrolysis” process — think of it as a slow cooker — which is supposed to be less polluting than “fast pyrolysis” — to use a cooking metaphor, flash frying — even with the addition of creosote-contaminated material. However, the technology has not been tested on a scale proposed by International Tie.

The company contracted with a Colorado firm, Biochar Now, to run emissions tests, which were  conducted on just three kilns of clean wood last year. As for creosote-treated railroad ties, the only test cited in International Tie’s air quality permit application was for one kiln; it was conducted five years ago.

By comparison, the International Tie facility would run 160 kilns per day, each of them filled with 1 ton of feedstock — equivalent to 58,000 tons per year.

Polivka told Policy Watch that the small kiln size — 1 ton versus 50 or 100 tons — at the proposed plant allows the emissions modeling to be more  accurate. When scaled upward, “the results are not subject to such unpredictability.”

Brown cautioned that feedstocks — materials used to make the biochar — should not be contaminated by heavy metals. While creosote does not contain those particular contaminants, it is a byproduct of coal tar, which is composed of hundreds of harmful chemical compounds.

Creosote is a registered pesticide used as a wood preservative; the EPA has approved it only for outdoor commercial use. Classified as hazardous waste, creosote and materials containing it, such as railroad ties, must be deposited in a special landfill.

Polivka said that a USDA study has shown that slow pyrolysis removes 99.94% of the creosote from the biochar.

Each of International Tie’s plants has applied for what’s known as a “synthetic minor” air permit. These types of permits can be granted to facilities whose emissions are too great to qualify as small emitters, but with the proper emissions controls can avoid being classified as a “Title V” or major pollution sources.

If built, the International Tie facility would add yet more pollution sources — not just from their smokestacks, but dust and truck emissions — to North Hamlet.

The Enviva wood pellet plant, a Title V facility, is within about a mile of International Tie. There are two more industrial plants that have small and synthetic minor air permits. The diesel trains that travel and idle at the CSX rail yard also emit pollution.

According to the NC Department of Environmental Quality’s Community Mapping System, there are also a solid waste landfill, two hazardous waste sites and several historical petroleum spills within the census block.

That census block is home to 2,323 people. More than a third are Black, Latinx or American Indian; 62% of the households are low-income, many earning less than $15,000 a year. The census block has higher rates than the state average of deaths from heart disease, stroke, cancer, diabetes, as well as elevated infant death and child mortality rates. Rates of hospitalizations related to asthma are also above the state average.

DEQ Secretary Michael Regan has often told community groups that if they oppose a project, they need to try to thwart it at the local zoning level. Once the state receives a facility’s application, federal and state regulations can favor the polluter, or at the very least, constrain the agencies.

But that approach fails when the local government isn’t fully transparent. Earlier this month the Richmond County Commissioners approved CSX’s request for a rezoning of a part of its property, from “agricultural” to “heavy industrial,” apparently to accommodate International Tie.

Over the summer, International Tie had filed its permit applications for a facility at the same address, but as the Richmond Daily Journal reported, the commission did not disclose the company’s plans during a public hearing.

“Richmond County Commissioners don’t communicate with us,” said Debra David, a Hamlet resident. “We should know first. That’s how they got Enviva in.”

Richmond County Economic Developer Martie Butler told Policy Watch via email that “there are no laws which state the county or municipalities must communicate regarding rezoning efforts within their respective zoning jurisdictions.”

Butler said the site in question, because of its proximity to the CSX rail yard, “has seen significant interest within the past three years. … Any negotiations between the property owner (CSX) and any prospective industrial developers are confidential and may or may not share with local government.”

The Daily Journal quoted the mayor of Hamlet as saying he was unaware of the proposal. However, documents provided by Richmond County show that the Hamlet City Clerk sent a letter to International Tie informing the company that the site was not within Hamlet’s zoning jurisdiction.

Butler said nearby property owners were sent notices in the mail. But Lisa Gardner said her household, about one-third mile away, did not receive any notifications. Many town residents weren’t informed, the Gardners said. They worry not only about the air pollution, but the light and noise from the plants. In addition, the facility would be less than a mile from the City of Hamlet’s water supply.

“This was done in the dark,” Lisa Gardner said. 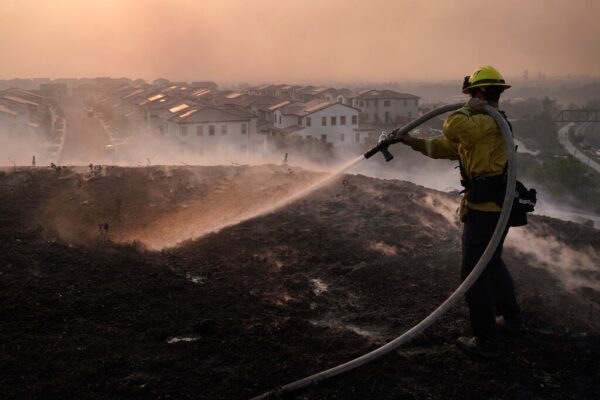 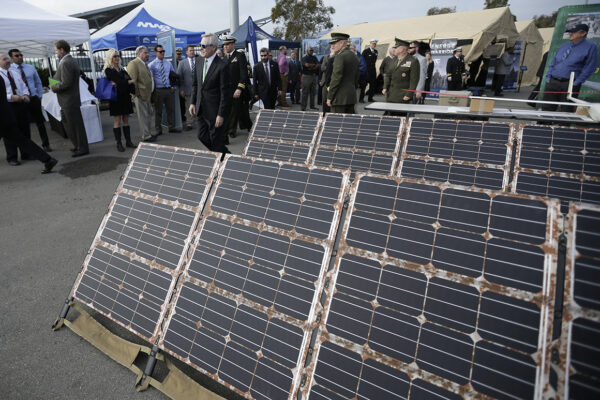 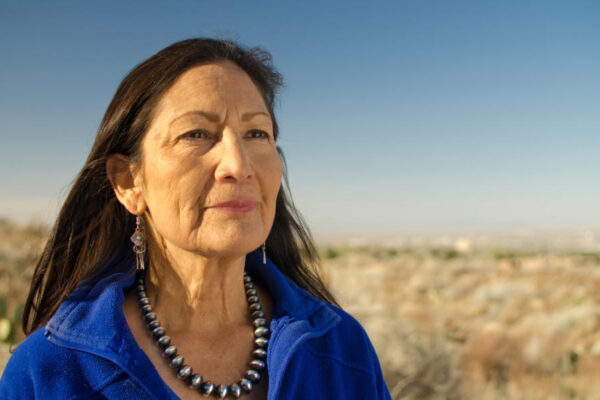