Posted on May 5, 2021 Categories: Latest News Comments are off for this post 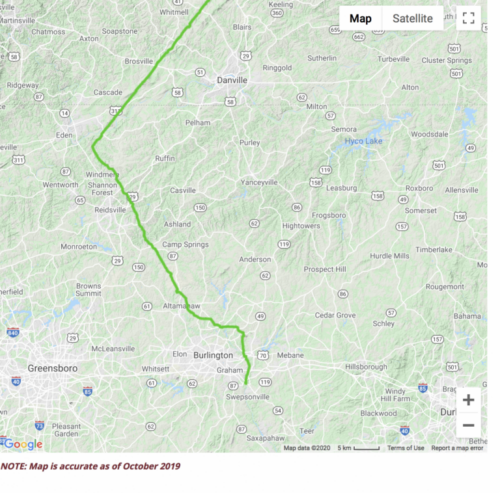 The North Carolina Department of Environmental Quality has again denied a key water quality permit for the proposed MVP Southgate natural gas pipeline, dealing another setback to the controversial project that would run through Rockingham and Alamance counties.

DEQ originally denied the water quality permit application last August. At the time Division of Water Resources Director Danny Smith wrote that because of “uncertainty surrounding the completion of the MVP Mainline project … work on the Southgate extension could lead to unnecessary water quality impacts and disturbance of the environment in North Carolina.”

MVP appealed the DEQ’s denial to the Fourth Circuit Court of Appeals in Richmond, Va. But last month, appeals court judges determined that DEQ’s decision to deny the permit was consistent with state and federal law. The agency also adequately explained its concerns about the viability of Southgate in the context of the delayed mainline project. But where DEQ erred, the court said, is that it failed to fully explain why it chose to deny the permit outright rather than granting a conditional one, contingent on the successful construction of the main line.

MVP Southgate would run from Chatham, Va., and enter North Carolina near Eden, in Rockingham County. From there, it would route nearly 50 miles southeast, cutting through Alamance County and ending in Graham. In total, the southern portion would cross 207 streams, three ponds and  temporarily affect 17,726 linear feet of streams, 6,538 square feet of open waters, and 14 acres of wetlands; another 0.02 of an acre of wetlands would be permanently damaged. Nearly 14 acres of riparian buffers would also be affected. MVP Southgate would cross the Dan River, home to endangered and threatened species, and Stony Creek Reservoir, the main drinking water supply for the City of Burlington.

Owned by Pittsburgh-based EQM Midstream Partners, MVP Southgate is an extension of the main MVP natural gas pipeline, which starts at a fracked gas operation in northern West Virginia and ends in Chatham, Va. However, the main MVP pipeline has been stalled by a succession of legal challenges brought by environmental groups, as well as stop-work orders enacted by the state of Virginia over environmental violations.

Those stoppages and legal entanglements have cast doubt on the viability of the MVP project, both the main line and the southern portion.

Already North Carolina residents have seen the consequences of pipeline construction. For the construction of the Atlantic Coast Pipeline, which would have traversed 160 miles in eastern North Carolina, contractors clearcut trees from some areas and excavated large swaths of land. But legal challenges and other permitting complexities doomed the Atlantic Coast Pipeline, which Duke Energy and Dominion Energy canceled last year. Now the utilities must repair the environmental damage, if that’s even possible. In addition, the ACP had used eminent domain or negotiated land deals for easements and right-of-ways for the route.

The agency also denied a Jordan Lake Riparian Buffer Authorization, which is required because the pipeline route is within the Haw River basin, a part of the Jordan Lake watershed.