Posted on June 19, 2019 Categories: Latest News Comments are off for this post 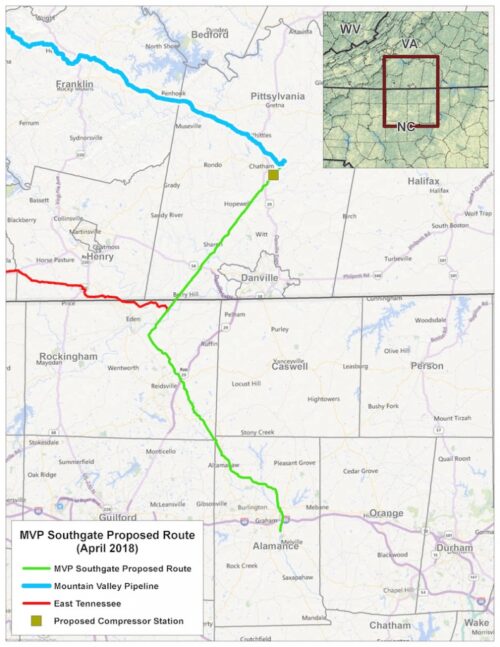 The Mountain Valley Pipeline Southgateproject encountered another setback this week, when the NC Department of Environmental Quality rejected a key water quality permit, a federal requirement for the plan to continue.

Although DEQ had repeatedly asked for information for more than six months, MVP Southgate hadn’t provided a full accounting of stream crossings and other impacts on waterways to the department. Without the additional information, DEQ couldn’t evaluate the application before a federal deadline, according to a letter from Linda Culpepper, director of the Division of Water Resources.

MVP Southgate has known of the federal timetable since March, when the Federal Energy Regulatory Commission publicly announced it would issue a proposed route and a draft environmental impact assessment next month.

MVP may re-apply to the division, but not until after federal regulators release their information. An MVP spokesperson said its project team intends to resubmit the application after FERC’s announcement. “The MVP Southgate project team has worked diligently to provide NC DEQ with comprehensive and updated information about the proposed route in accordance with federal regulations.”

Opponents of the project were relieved about the delay. “This is a win for landowners, tourists and farmers, as well as for water quality and the environment as a whole,” said Steven Pulliam with community group Good Stewards of Rockingham. “Numerous streams and wetlands would be crossed along Southgate’s path which also passes dangerously close to homes and private wells. MVP has been unable to demonstrate proper execution of these crossings on its uncompleted and ever-inflating 300-mile mainline project.”

The MVP project is owned by EQM Midstream Partners, a publicly traded company based in Pennsylvania. The main portion of the pipeline begins at a fracked gas operation in West Virginia and runs through central Virginia. The southern extension would start in Chatham, Va., enter North Carolina in Eden. The pipeline, 24 inches in diameter, would then travel 46 miles through Rockingham and Alamance counties, ending near I-85/I-40 in Haw River.

Early drafts of the route show the the pipeline could crisscross North Carolina waterways, including the Dan River and tributaries to the Haw River, more than 80 times. Over a third of the route is forested.

MVP Southgate filed for a water quality permit on Nov. 30, 2018. In early January, DEQ asked for more information, and the next month, MVP replied that it was still evaluating prospective routes and would provide updated list of impacts “at a later date.” MVP also told DEQ that it would file a final plan for all proposed “permanent fills of aquatic resources” in North Carolina once it had finished the surveys and finalized the project design.

In late March, DEQ again returned the application as incomplete.

“This may seem like just an administrative decision, but it shows just how hard the pipeline company wants to rush this project by trying to get a state permit that has to be grounded in information that’s not even out yet,” said Ridge Graham, North Carolina Field Coordinator with Appalachian Voices.

MVP had estimated it would start construction early next year; given the inevitable delays and probable legal challenges, that timetable looks unlikely.

“We’re encouraged to see that NC DEQ is not going to rubber stamp this project, even as the company is rushing to get permits approved without adequate documentation,” said Emily Sutton, the Haw Riverkeeper, with the Haw River Assembly. “This project puts our streams and drinking water at risk, and is not needed to meet our energy needs in North Carolina.”

As Policy Watch previously reported, last November DEQ Assistant Secretary Sheila Holman submitted a formal comment to FERC questioning the need for the pipeline. In that eight-page correspondence, Holman wrote that MVP’s predictions of a gas shortage were not factually supported: “We remain unconvinced the Southgate project is necessary.”