Posted on February 25, 2020 Categories: Latest News No comments yet 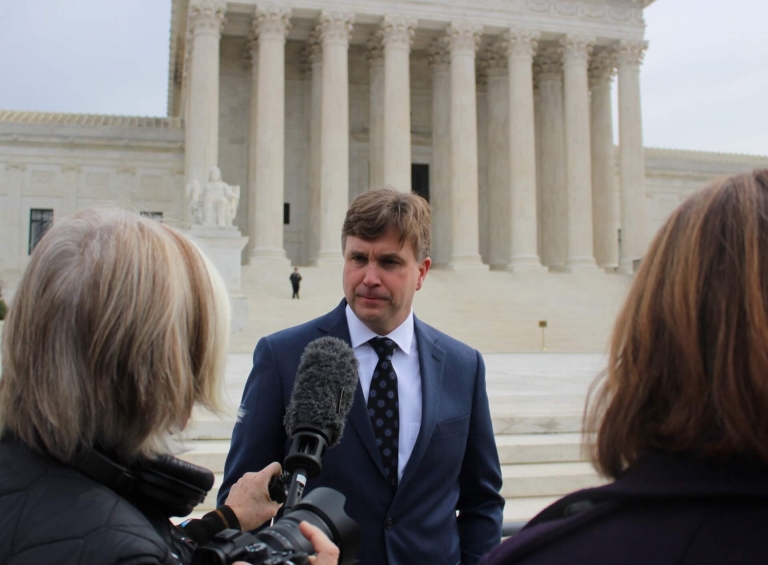 WASHINGTON, D.C. — Where does a trail end and the land beneath it begin?

That’s just one of the thorny questions the Supreme Court grappled with Monday morning during a one-hour hearing on a U.S. Forest Service permit for the controversial Atlantic Coast Pipeline. The hearing has been hotly anticipated by both the gas and oil industry, which supports the pipeline, and the environmental advocacy community, which opposes the project.

Since its inception, the Atlantic Coast Pipeline, a 600-mile conduit that would bring natural gas from West Virginia, through Virginia and into North Carolina, has been challenged on multiple fronts. The project, which is owned by a partnership that includes Dominion Energy, Duke Energy, Piedmont natural Gas and Southern Company Gas, currently has eight outstanding permits that have been revoked as a result of legal resistance.

The issue before the U.S. Supreme Court Monday concerned a permit granted by the U.S. Forest Service giving the pipeline the right-of-way to cross federal lands beneath the Appalachian Trail.

A December 2018 decision by the U.S. Court of Appeals for the 4th Circuit stripped the pipeline of that permit on the grounds that the Forest Service had acted “arbitrarily and capriciously” and didn’t have the authority to grant rights-of-way for pipelines to cross federal lands under the Mineral Leasing Act.

It was the latter determination that the Supreme Court took up Monday in a narrow, complicated case that pushed environmental concerns to the back-burner to focus on exactly what authority Congress has given to what agency to manage federal lands in the National Park System.

The Mineral Leasing Act says that “rights-of-way through any federal lands may be granted by the secretary of the interior or appropriate agency head for pipeline purposes,” but defines federal lands as “all lands owned by the United States except lands in the National Park System.”

Whether the Appalachian Trail is just a trail that runs over the surface of the land or includes all the land beneath it — “down to the center of the earth,” as Justice Stephen Breyer put it — was a point of contention during arguments.

“The central flaw in the court’s logic lies in the fact that the Appalachian Trail is a ‘trail,’ not ‘land,’” the federal government’s brief argued.  “Congress’s charge to the secretary of the interior to provide ‘overall administration of a trail’ does not transfer any administrative jurisdiction over the federal land that the trail traverses. Those lands remain under the administrative jurisdiction of their relevant federal land-management agencies. As such, National Forest lands crossed by the Appalachian Trail remain under the jurisdiction of the Forest Service.”

“You’re saying that the trail is distinct from the trail,” said Justice Kagan early in the hearing. “Nobody makes that distinction in real life.”

But Paul Clement, an attorney for the Atlantic Coast Pipeline, argued that “multiple provisions” of the National Trails System Act draw a distinction between the two, and that conflating them would have “untenable consequences,” including the conversion of the Appalachian Trail into a 2,200-mile barrier to all pipeline development that would deprive eastern states of natural gas.

That argument seemed to strike a chord with several justices, including Chief Justice John Roberts and Justice Brett Kavanaugh, who both questioned Michael Kellogg, the attorney representing the consortium of five Virginia conservation groups opposing the Forest Service permit, about the potential outcome of creating what Roberts called “an impermeable barrier” to gas transportation.

Kellogg, however, contended that argument was misleading, because the Mineral Leasing Act only applies to federal lands and does not prohibit the granting of rights-of-way for pipelines beneath the trail on state, local and private lands.

About 50 pipelines currently cross the Appalachian Trail, either on state, local or private land, or on federal lands under rights-of-way established prior to the passage of the Mineral Leasing Act.

Greg Buppert, an attorney for the Southern Environmental Law Center, a law firm that has been heavily involved in fighting both the Atlantic Coast Pipeline and the Mountain Valley Pipeline, said after the hearing that it was the “unprecedented” nature of the request for a right-of-way to construct a pipeline across federal lands that had brought the case to the Supreme Court.

The statutes, he said, “make it clear that this part of the Appalachian Trail gets its highest protections.”

At the same time that lawyers representing the parties made their cases to the justices inside the Supreme Court, environmental activists and individuals living near the planned route of the pipeline gathered outside to voice their opposition to the project. According a press release distributed by the group Friends of the Earth Action, twelve individuals were arrested for blocking traffic and refusing to clear the street.

This is from the release:

“The Atlantic Coast Pipeline is an unnecessary and dangerous project,” said Donna Chavis, senior fossil fuels campaigner with Friends of the Earth Action. “This fossil fuel development is based on greed and not need, and will lock us into 30 years of fracked gas use, further delaying the transition to renewables. We cannot allow this to happen and we are here today to make sure the Supreme Court and the fossil fuel industry hear our voices.”

A decision in the case is not expected until late spring.