Posted on July 9, 2021 Categories: Latest News Comments are off for this post 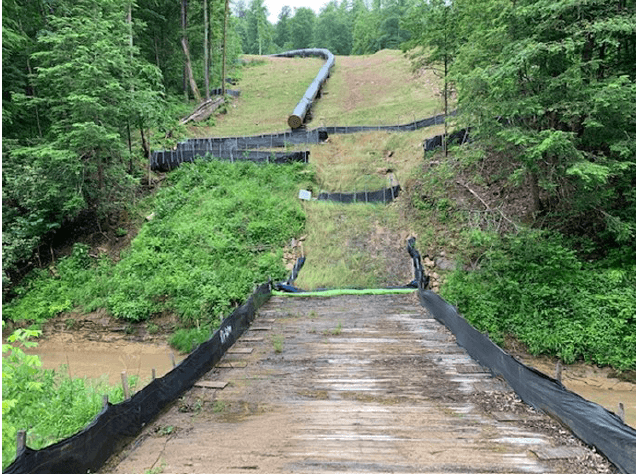 The U.S. Environmental Protection Agency has recommended that the Army Corps of Engineers not grant Mountain Valley Pipeline a critical permit to cross several hundred streams in Virginia and West Virginia.

“EPA has identified a number of substantial concerns with the project as currently proposed, including whether all feasible avoidance and minimization measures have been undertaken, deficient characterization of the aquatic resources to be impacted, insufficient assessment of secondary and cumulative impacts and potential for significant degradation, and the proposed mitigation,” EPA Wetlands Branch Chief Jeffrey Lapp wrote in a May 27 letter.

The letter was released in response to a Freedom of Information Act request by environmental law firm Appalachian Mountain Advocates.

Roy Seneca, a regional spokesperson for the agency, said in an email Thursday that “EPA’s recommendation in the letter still stands.”

Among areas of concern highlighted by the EPA are the Upper Roanoke watershed, which will experience 200 of the project’s proposed 719 stream impacts, and the Middle New watershed, which will see nearly 100 impacts. Numerous Southwest Virginia counties and cities, including Montgomery, Floyd and Roanoke, fall within these watersheds.

“While many of the discharges of fill associated with the proposed construction activity may be considered temporary, the impacts from those discharges may have lasting effects, particularly due to the sensitivity of the aquatic resources and the repetitive nature of impacts to some of the tributaries,” EPA wrote.

Natalie Cox, a spokesperson for Mountain Valley Pipeline, said in an email that the company has “continued to work closely with all federal and state agencies to address MVP’s permit applications.”

“These efforts remain ongoing, and we are committed to meeting or exceeding all applicable compliance requirements related to environmental protection,” she wrote.

Mountain Valley has struggled throughout its development to obtain and keep required environmental permits, causing its price tag to balloon to nearly $6.2 billion and its projected completion date to be repeatedly pushed back.

In North Carolina, the fate of the Mountain Valley Pipeline will likely determine whether the MVP Southgate project is built. MVP Southgate starts at the end of the main line in Virginia, enters North Carolina in Rockingham County, then travels roughly 50 miles southeast, traversing Alamance County and ending in Haw River.

The NC Department of Environmental Quality has twice denied the MVP Southgate’s water quality permit application, citing in part, the uncertainty of the main line. DEQ has told MVP Southgate that if construction begins without the main line, the environmental impacts to rivers, streams and forests would be for naught. This scenario has a precedent: Duke Energy and Dominion Energy canceled the Atlantic Coast Pipeline after contractors had already begun clearcutting forests, excavating and laying pipe. Now the ACP must restore those areas, although in the case of the forests, it will be decades before those areas are made whole.

“It’s not just us that sees the deficiencies,” said David Sligh, conservation director for environmental group Wild Virginia, which has been one of Mountain Valley’s most outspoken challengers. “EPA sees the serious deficiencies. And we expect (the Virginia Department of Environmental Quality) to insist that they get all the right information, and if they don’t get all the right information, they can’t issue a water quality certification, not legally.”

Sarah Vogelsong is the environment and energy reporter for the Virginia Mercury, which first published this report. Lisa Sorg contributed North Carolina information.