Posted on November 6, 2020 Categories: Latest News Comments are off for this post 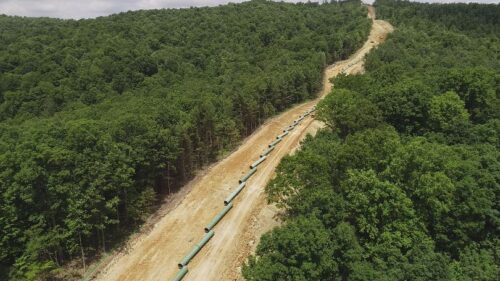 Equitrans Midstream Corporation (ETRN) said this week that the cost estimate of the Mountain Valley Pipeline (MVP) is now between $5.8 billion and $6 billion and the project’s full in-service date is anticipated during the second half of 2021.

When construction started on the pipeline in 2018, the cost was estimated to be $3.7 billion. In its financial and operational report for the third quarter, ETRN attributes the latest increase to the more costly task of continuing construction through the winter following unanticipated legal delays during the prime 2020 construction season. A major breakthrough for the project was the recent lift of a year-long stop work order from the Federal Energy Regulatory Commission, allowing MVP to move forward with construction along the majority of the route.

Environmental groups have long opposed the pipeline, however, arguing that it will mar the landscape of southwest Virginia, clog streams and rivers with harmful sediment washed from its construction, and jeopardize endangered species of fish and bats in the region. The activist groups have challenged several permits issued to MVP over the last three years, including a lawsuit filed last week against the U.S. Fish and Wildlife Service over its conclusion that the pipeline would not affect protected species.

In September, MVP received the project’s new Biological Opinion. A challenge was filed against the Biological Opinion in late October. Additionally, shortly after receiving approval for the project’s Nationwide Permit 12 (NWP12) from the U.S. Army Corps of Engineers, the Fourth Circuit Court of Appeals issued a temporary administrative stay of the MWP12, preventing construction of waterbody crossings under the USACE’s MWP12 program until the Court rules on the full motion to stay. The Court scheduled oral arguments for Nov. 9.