Posted on October 15, 2019 Categories: Latest News No comments yet 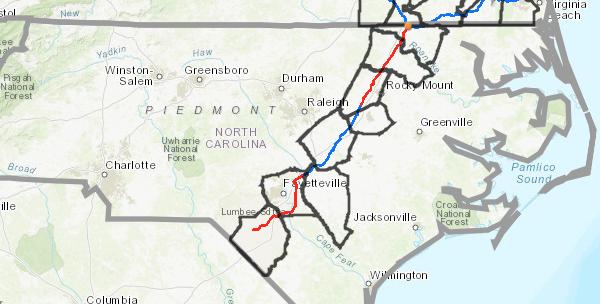 By: Lisa Sorg, The Progressive Pulse

The employees could appear before a subcommittee as early as the week of Nov. 4.

If built, the ACP would started at a fracked natural gas operation in West Virginia, traverse through Virginia and enter North Carolina in Northampton County before continuing 160 miles through the eastern part of the state. Tens of thousands of people oppose the project because it would harm waterways, wildlife habitats and air quality, as well as raise environmental justice issues. Many of the communities along the route are largely Black or American Indian, and low-income.

In January 2018, Cooper announced his office had brokered a deal that would require Dominion and Duke Energy, the majority co-owners of the natural gas project, to pay into a mitigation fund to help renewable energy and economic development projects in eastern North Carolina.

With two hours of the governor’s announcement, the state Department of Environmental Quality released a statement saying it had granted a key water quality permit that would allow the project to proceed. DEQ had delayed issuing the permit, known as a 401, for several months as it requested more information from Duke and Dominion.

The timing of the two announcements raised suspicions from some lawmakers and ACP opponents — who are rarely on the same side — that the permit approval was contingent upon the $57.8 million fund. Both DEQ and Gov. Cooper have repeatedly denied their respective offices coordinated such an arrangement.

Virginia cut a similar deal, but it was between state environmental regulators and the utilities; it was also binding.

North Carolina lawmakers subsequently hired Eagle Intel, an independent firm composed of former IRS investigators, to look into how the deal was struck.

Last Friday, un an acrimonious exchange of letters, Republicans Sen. Harry Brown and Rep. Dean Arp complained that the governor had instructed some employees “not to cooperate” with Eagle Intel.  Brown and Arp offered to allow the employees to answer questions from the Subcommittee on the Atlantic Coast Pipeline about the governor’s “participation in the ACP permitting process,” as well as inquiries regarding the fund between the executive branch, the solar industry and Duke Energy.

Kristi Jones, the governor’s chief of staff, responded that employees would answer lawmakers’ questions, but only publicly, and not privately, as lawmakers had originally requested. “The fact you intend to inquire about the propriety of the funds paid by Duke is hypocritical at best, given that you have already appropriated those funds. Clearly, you did not believe a mitigation fund was inappropriate. You simply want to control it.”

When Republicans had veto-proof control of both the House and Senate, lawmakers passed legislation redirecting the funds to public school districts along the ACP route. However, no funds have been disbursed because they are to be apportioned in stages, including when the pipeline begins operating.  Legal challenges have halted construction for nearly a year. Recently the US Supreme Court has agreed to hear an appeal from the utilities, which are contesting a federal appellate court decision to revoke a US Forest Service permit allowing it to cross the Appalachian Trail.

Read the article on The Progressive Pulse