Posted on September 14, 2021 Categories: Latest News Comments are off for this post 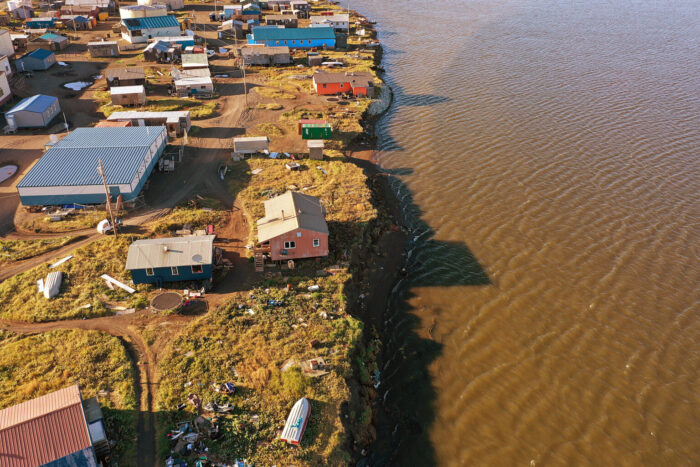 WASHINGTON—About 31 Native Alaskan communities face imminent climate displacement from flooding and erosion, which could lead cultures to disappear and ways of life to transform, with four tribes already in the process of relocating from their quickly disappearing villages.

The Kivalina, Shishmaref, Shaktoolik and Newtok, along with coastal Louisiana tribes, are among the most at risk of displacement due to climate change. But their efforts to move, according to tribal leaders, have been impeded by a lack of federal programs to assist in their relocation.

While there is no specialized federal program to assist in relocation efforts, the Federal Emergency Management Agency and the Department of Housing and Urban Development can help with specific projects like construction funding or affordable housing.

Native Alaskan villages often fail to qualify for FEMA programs because they lack approved disaster mitigation plans or have not been declared federal disaster areas, according to the Government Accountability Office. Many Native villages don’t qualify for relocation assistance from HUD because federal law does not recognize unincorporated Alaska Native villages in Alaska’s Unorganized Borough as eligible units of general local government. But the Unorganized Borough, which consists of those parts of the state that are not within any of its 19 organized boroughs, encompasses nearly half of Alaska’s land mass.

Five tribes from Alaska and Louisiana, including the Native Village of Kivalina, filed a complaint in 2020 with the United Nations that the U.S. government is violating their human rights by failing to address climate change impacts that are forcing their displacement, placing them at existential risk.

Inaction on climate change has resulted in communities being broken apart and losing ancestral homelands, sacred burial sites, cultural traditions and heritage and livelihoods, according to the complaint. While the government has known for decades that climate change threatens coastal tribes, it has failed to allocate resources to support the tribes’ community-led adaptation efforts, according to the complaint.

“Despite their geographic differences, the tribes in Louisiana and Alaska are facing similar human rights violations as a consequence of the U.S. government’s failure to protect, promote and fulfill each tribe’s right to self-determination to protect tribal members from climate impacts,” the complaint said.

The small coastal village of Newtok, 500 miles west of Anchorage on the Ninglick River near the Bering Sea, began moving in 2019 due to shoreline erosion from thawing permafrost and storm surge, a project over 20 years in the making.

The village’s 400 residents voted in 2003 to relocate to Mertarvik, a village nine miles away, but only 140 have moved so far. Relocation of the village is expected to be completed by 2023 at a cost of about $130 million to the federal and state governments, according to an estimate by the Army Corps of Engineers.

Kivalina, on a coastal barrier island 625 miles northwest of Anchorage, could disappear by 2025. In the early 1990s, tribal members like Colleen Swan began noticing changes in migration patterns of the bearded seals and whales they live on, as well as warmer temperatures and a decrease in sea ice.

“Our land just started eroding very quickly, right before our eyes,” she said.

While the Army Corps of Engineers built a rock revetment to stop erosion in 2008, that didn’t address sea level rise. Ice that surrounded the island melted and was not there to buffer fall sea storms coming from the south.

Kivalina residents have begun planning the move off their barrier reef island to the mainland, but don’t have enough money to implement a relocation. Moving Kivalina’s 400 residents elsewhere has been estimated to cost up to $1 million per villager. Swan said she’s afraid that if the federal government is in charge, it will make decisions without the tribe’s input.

“When you know what you want and what you need as the local leader, they have trouble with that,” she said. “We’re supposed to be helpless and dependent on government.”