Methane Is a New Big Enemy in the Battle Over Climate Change, IPCC Says

Posted on August 11, 2021 Categories: Latest News Comments are off for this post 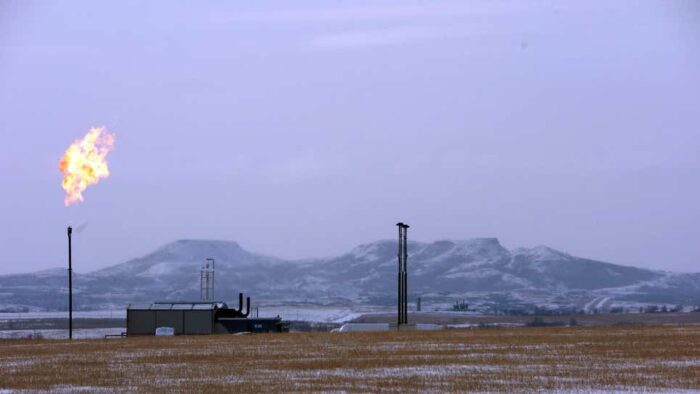 The Intergovernmental Panel on Climate Change is ringing its first serious alarm bell on the role methane emissions play in climate change. Hundreds of scientists said in the latest IPCC report, published on Monday, that methane emissions in the atmosphere are at their highest levels in hundreds of thousands of years, thanks to human activity. In order to stave off the worst impacts of climate change and to start ramping down warming now, the report says, countries need to figure out ways to make “strong, rapid and sustained reductions” in methane emissions—in addition to ramping down CO2.

Anyone who has been paying attention to this website knows that methane plays a big role in short-term warming. Methane only lasts for around a decade in the atmosphere (compared to carbon dioxide, which can linger anywhere from 300 to 1,000 years) making it less of a concern for long-term warming. But it really packs a punch while it’s here: methane is 80 times more potent than CO2.

The IPCC, which puts out its comprehensive assessment reports just once every six or seven years, hasn’t tended to focus on methane in past reports. This is in part because the IPCC has traditionally concentrated on the long-term stability of the climate—cutting CO2 emissions is the number one priority there.

But the new report also lays out how dire our current situation is. We’re simply way ahead of schedule when it comes to warming, with the possibility that we could blow past the limit of 1.5 degrees Celsius (2.7 degrees Fahrenheit) of warming that scientists set out in the Paris Agreement by the 2030s. That’s… super soon, and around a decade earlier than what was projected in the IPCC’s last “special” report in 2018. We need to start figuring out ways to keep immediate warming down now, while continuing to cut CO2 for long-term results. And, as this summer of wildfires, floods, droughts, and other climate-related disasters has shown, we’re being rocked by the impacts of warming now—cutting all types of emissions as quickly as possible is crucial for our future survival.

“If there’s one simple takeaway [from this report], it’s urgency,” Ilissa Ocko, a climate scientist at Environmental Defense Fund, said on a press call Monday. “Drastic cuts in CO2 and, eventually, net zero CO2 emissions will be critical to limiting the extent of future warming. But cutting methane emissions is the single fastest, most effective way there is to slow the rate of warming right now.”

In the new report—the first comprehensive assessment from the IPCC since 2014, which provided the scientific basis for the Paris Agreement—the 234 scientists involved in its authorship found that there has been “a faster growth” of methane emissions between 2014 and 2019, compared to growth in previous years. Methane in the atmosphere, the report says, is higher than any time during the past 800,000 years, thanks to human activity. The report also points a finger at a culprit: the growth of methane emissions since 2007 is “largely driven by emissions from the fossil fuels and agriculture (dominated by livestock) sectors.” These two sectors, Ocko said, are responsible for a quarter and one-third of global methane emissions, respectively.

The IPCC findings are a major side-eye to these two industries—and should serve as a flag for the kind of public scrutiny and policy attention that has focused on driving down CO2 emissions from coal and oil to now turn to methane sources. The fracking industry was allowed to explode over the past decade under the guise that natural gas was a needed “bridge fuel” between fossil fuels and renewables, an idea that still persists today: documents exposed last month show that Big Oil, which has invested heavily in natural gas, pressured the UN to promote the fuel as a “necessary compromise” during the upcoming climate talks in Glasgow. While natural gas releases less CO2 over the long term than other fuel types, “the impact of methane in the near term can absolutely erase the benefit of using natural gas compared to coal or oil,” Ocko said. The beef industry, meanwhile, has been scrambling for pie-in-the-sky hacks like feeding cows seaweed to keep up beef production while claiming they’re reducing methane. The industry has also continued to claim methane emissions aren’t that bad, actually, and funding organizations and politicians that promote climate denial.

Even in the continually depressing world of climate reporting, this latest report is a sharp warning: Ocko called it “by far the most dire report we have seen from the IPCC to date.” In all this doom, the need to curb methane emissions provides a weirdly bright spot—provided we act fast. We actually have a lot of the technology and tools we need to get methane emissions down now. Ocko published research this spring that found that throwing all our current mitigation strategies to drive methane down at problem industries could slow warming by 30% over the short term, preventing 0.45 degrees Fahrenheit (0.25 degrees Celsius) of warming by 2050—not a small amount. Oil and gas, Ocko said, is the “lowest-hanging fruit;” many oil and gas producers are simply not aware of big methane leaks from their facilities, and the technology to monitor and spot methane leaks is getting better and more accurate.

“It’s important for everyone to understand that it’s never too late to act, but the sooner we act and the faster we go, the better off we’ll be,” said Ocko. “Each increment of extra warming we avoid helps reduce the intensity and frequency of extreme events and lowers the chance of catastrophic outcomes.”

Read the article on Gizmodo