Posted on November 5, 2021 Categories: Latest News Comments are off for this post 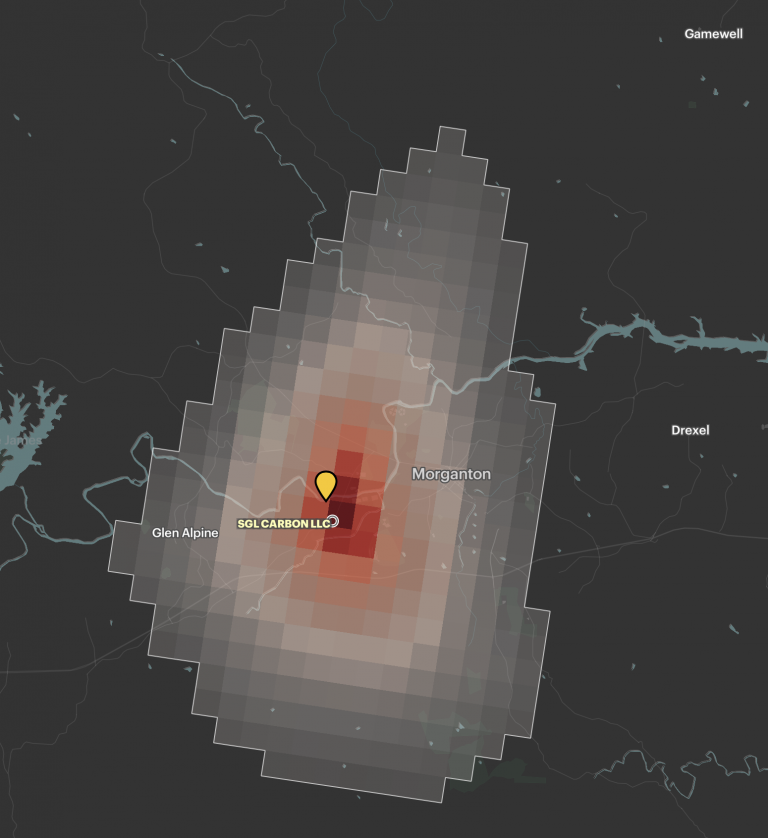 The hundreds of people who live closest to SGL Carbon in Morganton are breathing air so polluted that they face a lifetime cancer risk 120 times greater than set by the EPA. Each year, SGL is allowed by state permit to emits nearly a ton of methylene chloride and 174 pounds of benzene, both known carcinogens

The area near the plant is one of thousands of “hotspots” identified by ProPublica, which yesterday unveiled a massive environmental story that mapped the spread of cancer-causing chemicals from sources of hazardous air pollution across the country between 2014 and 2018.

Of the thousands of “hotspots” in the U.S. — not just census tracts, but down to the neighborhood level — there are more than 30 in North Carolina. (See list below.)

Over the last two years, ProPublica analyzed billions of rows of data and used advanced data processing software and a modeling tool developed by the EPA to calculate the elevated cancer risks for people living in these hotspots. The data includes only air pollution; there could be other pollution sources — PFAS, for example — that compound that risk. For example, near the SGL Carbon plant in Morganton there are four hazardous waste sites, as well as multiple leaking underground petroleum storage tanks.

At the most protective level, the EPA considers an elevated lifetime cancer risk to be 1 in 1 million.

That means if 1 million people are exposed to the same concentration of a pollutant continuously (24 hours per day) over 70 years (an assumed lifetime), one person would likely develop cancer from this exposure. This risk would be in addition to any cancer risk for a person not exposed to these air toxics.

The EPA has also set an “upper limit” — or less stringent risk level of 1 in 10,000 elevated lifetime cancer risk, as within the acceptable range. That translates to 100 in 1 million people would likely develop cancer from the exposure.

Nationwide, most of these hotspots are in communities of color, low-income neighborhoods, or both. In North Carolina, that pattern holds: Of the 33 hotspots that ProPublica identified, only two are in neighborhoods that are majority-white and not low-income, according to the NC Department of Environmental Quality Community Mapping System.

Here are the North Carolina hotspots, per the ProPublica air toxics map.

Note: Some facilities have changed names since ProPublica did their analysis, which covers 2014-2018.
Durafiber in Salisbury, identified by ProPublica, has closed, so is not included in this table.
While Fortron, in New Hanover County, has not been cited with Notice of Violation, the facility did receive a “Determination of Objectionable Odor” from the state Division of Air Quality for emitting a “cat urine” smell, as result of its processing.

Read the article and view the data on NC Policy Watch