Posted on June 11, 2019 Categories: Latest News No comments yet 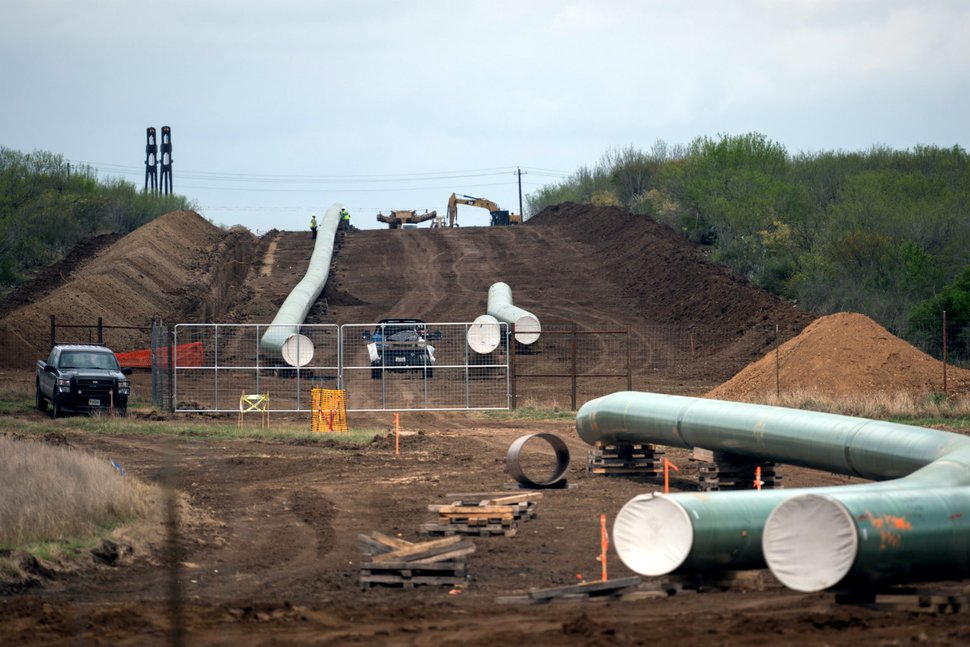 By: Alan Neuhauser, US News

LAWMAKERS IN TEXAS passed a bill last month that they say will speed the construction of some 11,000 miles of pipeline by 2050 that is needed to keep the state’s oil boom going: Any protester who blocks or otherwise “interferes” with the construction of an oil and gas pipeline, transmission line or other “critical infrastructure” project will face up to 10 years in prison – the same sentence given to some sex offenders, triggermen in driveby shootings and other felonies.

The bill is expected to be signed by Republican Gov. Greg Abbott. If he does, Texas will become the latest state to institute tough penalties aimed squarely at pipeline protesters. Such laws have been adopted in six states – Indiana, Louisiana, North Dakota, Oklahoma, South Dakota and Tennessee – and are pending in another seven, including Texas, according to the International Center for Not-for-Profit Law, which is tracking the measures.

Opponents warn that the laws – by singling out a particular type of protest – mark a dangerous infringement on First Amendment protections of free speech and assembly. The measures, they contend, ultimately do little to accelerate pipeline construction that existing laws don’t already accomplish, while needlessly instituting draconian penalties for activity that hardly presents the kind of harm inflicted by the violent crimes that come with similarly harsh sentences.

“These measures are deeply problematic: They are clearly targeting protests and particular types of protests, specifically anti-pipeline, pro-environment, pro-environmental justice,” says Vera Eidelman, a staff attorney at the American Civil Liberties Union. “All of these laws are about silencing vigorous advocacy.”

A dozen people last August were arrested under Louisiana’s version of the law – drafted by a state oil and gas lobbyist – one week after it went into effect. Civil liberties groups last week announced a lawsuit challenging the measure. A similar challenge is playing out in South Dakota.

Melinda Taylor, a senior lecturer at the University of Texas School of Law specializing in environmental law and energy development, says that the laws’ proponents contend that they’re ensuring protests don’t choke the U.S. energy boom.

“There’s a tremendous need to build more pipelines,” Taylor says. “The oil and gas industry has a lot of clout, and they’re attempting to tamp down that and get these built as quickly as possible.”

The bills’ supporters openly acknowledge that the measures were spurred by large-scale protests in 2016 and 2017 of the Dakota Access Pipeline in North Dakota, which drew thousands of people and heavy media coverage, sparked clashes between protesters and police, halted the project for nearly a year and cost more than $22 million in taxpayer money – mostly for law enforcement expenses.

“States don’t want to be left with whatever bill for damages and cleanup exist after this,” says Patrick Garry, a professor at the University of South Dakota School of Law.

Janne Myrdal, a Republican state senator who sponsored such legislation earlier this year in North Dakota, told the Associated Press, for example, that she drafted her bill in response to a protester who broke into a site along the existing Keystone pipeline in 2016.

Although the protester was ultimately convicted, sentenced to three years in prison and served about six months before being released, “There was frustration from law enforcement and residents that there wasn’t enough teeth in current law to go after these people and the organizations that support them,” Myrdal said.

Since the debates and protests waged over the Keystone XL pipeline during the Obama administration, pipelines have become one of the most visible flashpoints between environmental advocates and the oil and gas industry, with the projects’ symbolic importance often outstripping their impact on either climate change or the oil and gas industry.

“These protests were designed to attract attention and build support for the Keep It In the Ground movement, so there was a whole lot of intentional symbolism with these kinds of opposition actions,” says David Spence, professor of energy law at the University of Texas School of Law, referring to a movement among activists who think fossil fuel materials are best left untouched. With the pipeline protest laws, “the intention may be that maybe you make your base happy by proposing laws that would impose penalties on the kind of people that they don’t like.”

The pipeline protest laws draw from a playbook instituted for other highly visible protest movements: In the wake of Black Lives Matter protests that roiled cities nationwide, for example, Republican lawmakers in a handful of states introduced bills that would have stiffened penalties for a commonly used tactic in the demonstrations: blocking traffic. And following the high-profile release of undercover videos that revealed animal abuse at agricultural operations, about a half-dozen farm-heavy states passed “agricultural interference” – or “ag-gag” – bills that criminalized certain activities related to the filming of such videos.

“These bills have come up in the context of very notable protest movements,” says Elly Page, an attorney and legal adviser at the International Center for Not-for-Profit Law. “You have the Dakota Access Pipeline protests, a number of these bills explicitly proposed in response to Black Lives Matter protests. The lawmakers make that very clear – even if the bills facially don’t say it – that that’s their intent.”

The pipeline protest measures got their start in 2017 about 1,000 miles south of North Dakota in Oklahoma, another U.S. oil and gas hub. That May, three months after the last protesters were removed from the Dakota Access encampment, Oklahoma Gov. Mary Fallin, a Republican and fierce supporter of the oil and gas industry, signed a bill that instituted a 10-year prison sentence and up to $100,000 in fines for anyone who interfered with a pipeline project there – and up to $1 million for any group “found to be a conspirator” in such an effort.

The measure swiftly drew notice from the American Legislative Exchange Council, a conservative policy group heavily funded by the oil and gas industry that writes and shares model legislation for lawmakers across the country. The law became a template disseminated to other statehouses: The bill’s authors in Texas, for example, reportedly attended ALEC conferences before introducing the measure.

South Dakota, which is home to the existing Keystone pipeline network and lies along the route of the planned Keystone XL extension, went particularly far in its version of the law, instituting a measure that punishes so-called “riot-boosting,” a term developed by state lawmakers singling out anyone who, among other acts, “does not personally participate in any riot but directs, advises, encourages, or solicits other persons participating in the riot to acts of force or violence.”

The law quickly brought a legal challenge from the ACLU, which contends that the measure violates the First Amendment by vastly expanding a narrower offense that’s already on the books: incitement, which is not protected by the Constitution. However, the charge is rarely prosecuted, largely because it’s so difficult to prove without encroaching on the First Amendment.

“It’s almost impossible to ever prosecute someone for incitement,” Garry, of the University of South Dakota, says. “You’re going after, usually, one group of persons or a person who’s doing the incitement but another person who’s doing the physical acts. And you have to prove the linkage. And the burdens in First Amendment law, that’s very difficult to do.”

For that reason, he says, “from a state’s perspective, incitement could be seen as inadequate.”

The law, notably, is not exclusive to Republican-led states or even those with a heavy oil and gas presence: Pipeline-protests bills have been passed in Tennessee – which produced the seventh-lowest volume of crude oil in the U.S. in 2017, eking out New York and slightly less than Nevada – and even Illinois, which, though a Democratic stronghold, is also an endpoint of the Keystone pipeline, home to large oil and gas refineries, and made up of large swaths of rural and suburban Republican counties.

Uniting the measures, and the rhetoric around them, is a depiction of pipeline protesters as outside agitators. South Dakota Gov. Kristi Noem, for example, in a statement in March supporting the South Dakota riot-boosting bill and another measure designed to speed pipeline construction, declared that the bills were crafted “to go after out-of-state money funding riots that go beyond expressing a viewpoint but instead aim to slowdown the pipeline build. It allows us to follow the money for riots and cut it off at the source.”

Environmental advocates readily point out that oil and gas interests are often themselves out-of-state interests, especially in the case of Keystone XL, which is backed by TC Energy, recently rebranded from “TransCanada.”

The two sides aren’t without contradiction: Without sufficient pipeline infrastructure, gas producers are simply burning off – or “flaring” – excess gas, which puts more heat-trapping carbon into the atmosphere. They’re also sending oil and gas by truck and train, which produce more greenhouse gas emissions and are more prone to leaks. The boom, meanwhile, shows little sign of abating.

“It’s a level of activity that is just incredibly intense,” Taylor, of the University of Texas School of Law, says of pipeline construction. “It’s hard to describe unless you’re on one of the sideroads or main highways and driving along and seeing acres and acres of pipe laid out and huge numbers of trucks with water and frac sand and oil on the road barreling down the highway – it is really, really intense out here.”

Read the full article on US News