Why Do Environmental Justice Advocates Oppose Carbon Markets? Look at California, They Say

Posted on February 28, 2022 Categories: Latest News Comments are off for this post 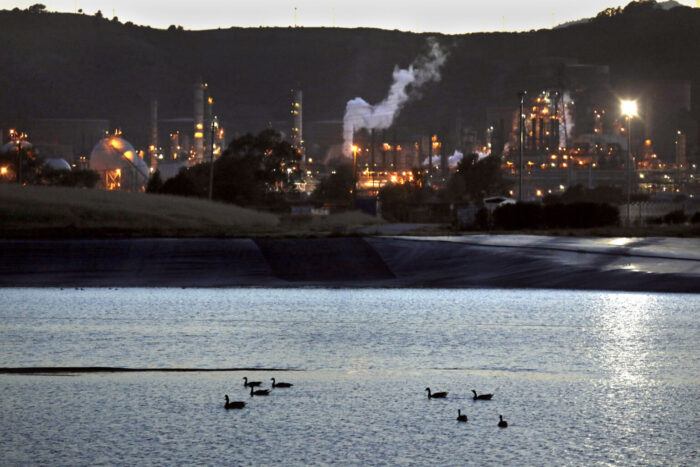 California’s carbon market could be hurting the state’s chances of meeting its ambitious climate goals, while at the same time exacerbating pollution in already overburdened communities, two new reports warn.

In a report released earlier this month, a state-appointed panel of experts, known as the Independent Emissions Market Advisory Committee, warned that California could miss its legally binding target of reducing greenhouse gas emissions by 40 percent below 1990 levels by 2030, largely as a result of the design of the state’s complex “cap-and-trade” market.

A second report, published Feb. 15 by University of Southern California researchers, found that communities with a higher concentration of people of color and more households that fall below the federal poverty line were less likely to see reductions in pollution and more likely to live near polluting plants that participated in cap and trade.

The reports are the latest in a growing body of research that suggests that while cap-and-trade programs can reduce emissions overall, they can also inadvertently maintain or even worsen environmental disparities by allowing polluting industries, which are often located in Black and Brown neighborhoods, to essentially buy their way out of reducing their emissions.

California’s cap-and-trade program, which began in 2013, provides incentives for private companies to voluntarily reduce their greenhouse gas emissions by making the price of releasing those emissions more expensive over time.

The state sets an emissions limit—or “cap”—requiring companies to either keep their emissions within the limit or alternatively buy pollution “allowances.” As the cap becomes stricter, those allowances become scarcer and more expensive over time. The allowances essentially tell the state that while a company may not have reduced its emissions, those emissions were reduced somewhere else. That could be because some companies reduced their emissions well below the threshold and then sold—or “traded”—their extra reductions as credits to other companies. Or it could be because a company invested in a carbon offset project that, at least in theory, reduced emissions elsewhere, for example, by planting trees in the Amazon rainforest.

California requires that at least 35 percent of the investments made from cap-and-trade revenue go to disadvantaged communities.

Still, the trading aspect of the program has allowed some industries to not only avoid reducing their emissions but in some cases to increase them, said Amee Raval, the research and policy director for the Asian Pacific Environmental Network.

For example, California’s total greenhouse gas emissions have dropped by at least 30 million metric tons of CO2 equivalent since the state’s cap-and trade program began, according to state data. But at the same time, emissions from the oil and gas industry have gone up, the USC study says. That finding tracks with a 2018 study published in PLOS Medicine, which found that greenhouse gas emissions rose for 52 percent of cap-and-trade regulated facilities from 2013 to 2015.

The USC study’s finding also tracked with a 2019 investigation by ProPublica, which found that carbon emissions from California’s oil and gas industry have risen 3.5 percent since the cap-and-trade program began. The oil and gas facilities’ operations also produce harmful pollutants such as nitrogen oxide and soot, which have been tied to increased risk of asthma and cardiovascular and lung diseases, and an increased risk of premature death.

That’s an especially big deal for environmental justice communities, which are disproportionately located near those facilities, Raval said. As an example, Raval pointed to the Chevron oil refinery in Richmond, California. The refinery is the state’s single largest contributor to greenhouse gas emissions and is located in a city where people of color make up more than 60 percent of the population, and nearly 15 percent of households fall below the federal poverty line, according to census data.

“The reality is cap and trade is really letting California’s business polluters off the hook, concentrating pollution in working class communities of color and undermining the credibility of our climate policy,” Raval said.

The California Air Resources Board, which manages the state’s cap-and-trade program, said in an email that the board appreciates the work done by the USC researchers, but added that a separate analysis done by the state came to a different conclusion.

That report, published Feb. 3 by the state’s Office of Environmental Health Hazard Assessment, found that communities of color and disadvantaged communities—determined by the state’s screening tool—were the “greatest beneficiaries of reduced emissions” from facilities subject to the cap-and-trade program, resulting in a shrinking of California’s environmental disparities. The report, however, noted that the disparities remain large and more must be done to address them.

The air resources board also said California’s program was designed to anticipate times of low and high demand for allowances and had mechanisms built in to help ensure that allowances don’t jeopardize the state’s climate goals. That could mean taking some allowances off the market, though that idea has received strong pushback from industry.

But the Independent Emissions Market Advisory Committee made clear in its report that it believed allowance trading could hinder California from reaching its 2030 climate target.

One allowance equals 1 metric ton of carbon dioxide equivalent emissions, or roughly the amount released into the atmosphere by driving a car 2,500 miles. But according to the committee’s report, “some 321 million allowances were banked into the market’s post-2020 period, equal to more than the emissions reductions expected from the program over the coming decade,” with most of those allowances coming from forestry offset projects.

That means that instead of reducing their emissions, many of California’s biggest companies stockpiled allowances by paying for projects that planted or protected trees—the idea being that those trees would help sequester carbon from the atmosphere. But many climate activists have criticized that approach, saying there’s no way to guarantee that offset projects actually do what they intend to do. For example, an estimated 153,000 acres of forests that are part of California’s carbon-offset program burned in wildfires last summer, but companies can still claim those forests as allowances.

The recent reports sparked renewed calls from activists, urging California officials to review how cap and trade impacts the state’s climate goals. But at a legislative hearing Wednesday, the state’s top regulator said California wouldn’t be making changes to the program anytime soon.

Environmental justice activists have long warned governments not to rely too heavily on carbon markets in their efforts to fight climate change, saying they could jeopardize long-term emissions reduction goals and increase the burdens on vulnerable communities. Instead, activists say, governments should pass stronger regulation that requires direct emissions reductions from industries before relying on market incentives.

Last year, activists in New York and New Jersey helped contribute to the death of the Transportation Climate Initiative, a proposed regional carbon market that would have put a limit on tailpipe emissions and forced fuel producers to reduce pollution or similarly buy allowances.

That program was intended to mirror the Regional Greenhouse Gas Initiative, and its crafters hoped to recruit New England and Mid-Atlantic states to participate. Connecticut, Maryland, Rhode Island and Washington, D.C. all tentatively agreed to implement the project. But the program was heavily lobbied against by a coalition of environmental justice organizations in states like New Jersey and New York, which argued the fuel companies would pass the extra cost on to low-income drivers who were less likely to benefit from pollution reduction and had less access to electric vehicles.

“Folks with access to cleaner cars are not going to be paying those gas taxes much, and then those gas taxes go to pay for cleaner cars and electric vehicle infrastructure,” said Melissa Miles, executive director of the New Jersey Environmental Justice Alliance. “That’s a problem if the structural issues, such as high front-end costs remain a barrier for low-income people as they continue to get shut out of the benefits while still paying the entrance fee.”

Connecticut, Maryland and Rhode Island all pulled out of the proposal last year, as public pressure from environmental justice groups grew and as governors expressed concern about the program raising the price of gasoline in their states. By December, the initiative was effectively dead.

Some in the environmental community say they still believe carbon markets can be operated equitably, especially if they’re paired with regulation that directs the revenue generated by the programs to vulnerable populations. For example, a 2018 report from the Tax Policy Center and Columbia University’s Center for Global Energy Policy found that while a carbon tax alone could be regressive, adding a rebate could offer low-income households an average annual tax cut of about 4.4 percent.

In line with that view, Washington state passed its first carbon market legislation last year, despite a decade of infighting among environmental justice activists. The state’s Climate Commitment Act established what its proponents call a cap-and-invest program, since it includes a provision that—similar to California—requires at least 35 percent of the revenue raised by the program to be spent in vulnerable communities, with an additional 10 percent for tribal lands.

In California, activists have pushed state officials to use those revenues on things like installing solar panels on affordable housing, boosting energy efficiency programs and increasing access to public transit and ridesharing.

But those benefits don’t make up for the fact that pollution is rising in poor communities and California is on track to blow its climate goals, Raval said. “Cap and trade will not generate the emissions reductions we need, and the stakes are too high to double down on a failed policy,” she said.