Why ‘I can’t breathe’ is resonating with environmental justice activists

Posted on June 17, 2020 Categories: Latest News Comments are off for this post 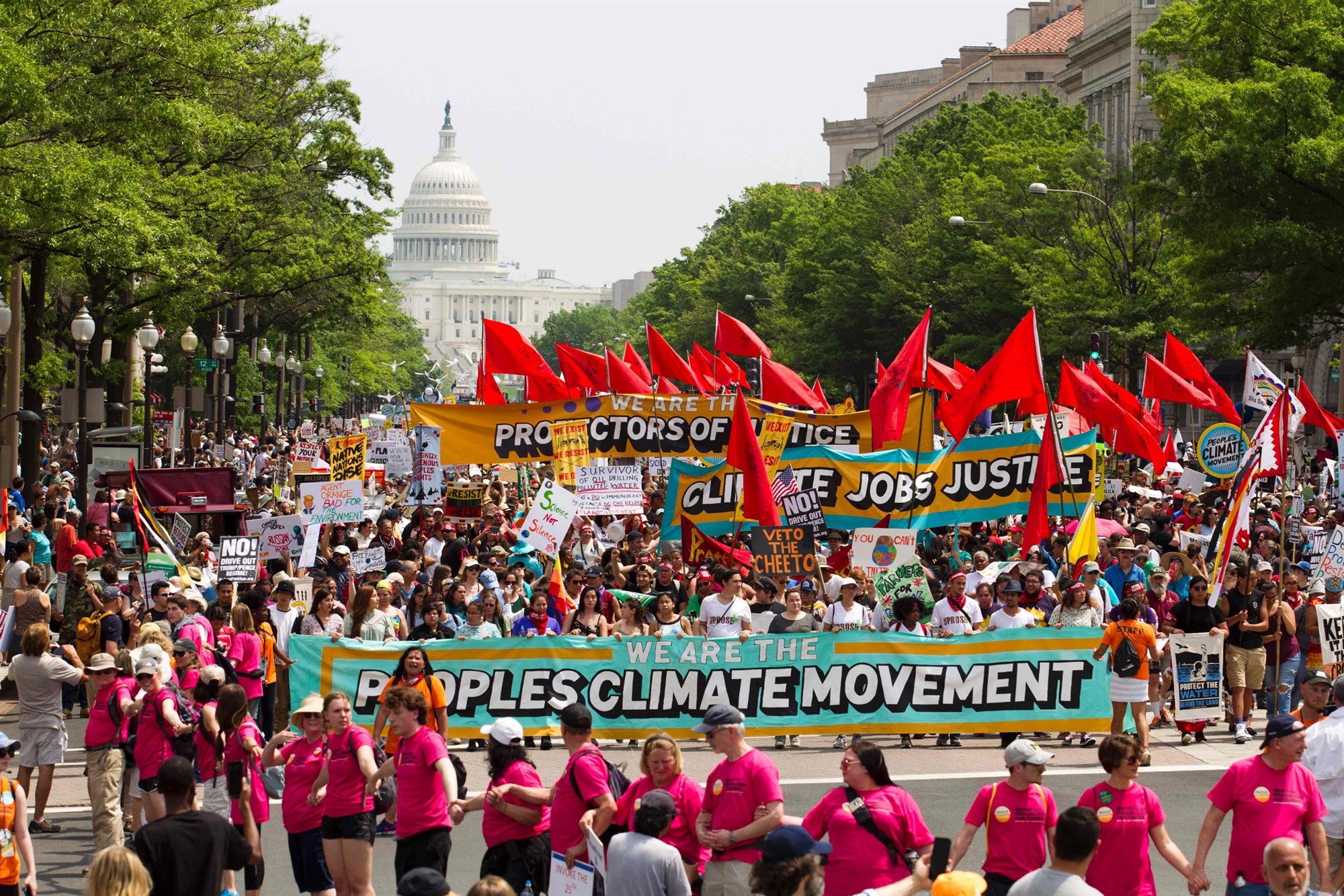 The death of George Floyd in police custody sparked a movement that has focused national attention on institutional racism that permeates nearly every aspect of society.

And that includes climate change.

Now, climate activists and scientists say a similar reckoning needs to happen in the environmental movement, which experts say has had a long, uneasy relationship with racial politics.

“There’s a level of racism in the movement itself, where some folks think that talking about these issues is a distraction,” said Jacqueline Patterson, director of the NAACP’s Environmental and Climate Justice Program. “Nobody is donning a white hood, but the racism and implicit bias is evident.”

Elevating racial justice issues within the environmental movement has been a struggle, Patterson said, despite what the science shows about which communities are most at risk from climate change.

A landmark 2018 federal report found that low-income communities are more likely to be exposed to pollution and other environmental hazards. The study also noted that the same communities take longer to recover from natural disasters, such as flooding and hurricanes.

A 2019 report co-authored by the Natural Resources Defense Council analyzed data from the Environmental Protection Agency and found strong correlations between the racial makeup of communities and their access to safe drinking water. And a 2013 study published in the journal Environmental Health Perspectives found that black Americans are 52 percent more likely than white Americans to live in urban heat islands, putting them at increased risk during heat waves.

Yet, racial issues haven’t always been at the forefront of climate debates.

“The people most responsible for climate change historically — globally, as well as domestically — are not the same people who are feeling the pain first, worst and longest,” said Robert Bullard, a distinguished professor of urban planning and environmental policy at Texas Southern University in Houston. “If you’re just talking about greenhouse gases and parts per million, you’re not seeing the issues around vulnerability and justice.”

Bullard is a leading voice in the field of environmental justice, which advocates that the effects of climate change and any proposed solutions must be viewed through the lenses of racial and economic inequities. The movement emerged in the 1980s, as evidence began mounting that black communities — and communities of color, in general — were disproportionately being affected by global warming.

Bullard’s awakening about environmental justice happened in the late 1970s, when his wife, Linda McKeever Bullard, a lawyer, became involved in a class-action lawsuit brought by black homeowners in Houston. The 1979 suit, Bean v. Southwestern Waste Management Corp., challenged plans to establish a municipal landfill in the plaintiffs’ neighborhood.

Bullard, a sociology professor at the time, launched an expansive research project to document the locations of all the landfills and waste incineration plants in Houston, a city with no zoning laws. He and his students pored through city records, census data and archival documents from the 1930s to 1978 and found that 100 percent of city-owned landfills, and 3 out of 4 privately owned landfills, were in black neighborhoods.

“Eighty-three percent of all the waste dumped in Houston from the 1930s was in black neighborhoods, even though black people made up only 25 percent of the population,” he said.

The court ruled in favor of Southwestern Waste Management, but the moment galvanized Bullard. Yet, when he took his findings to environmental and civil rights groups, Bullard said, he was met with a lack of support.

“That was an eye-opening moment for me,” he said. “There was no environmental justice movement in 1979. We had white environmental groups that didn’t understand the issues and the injustice, but we also had black civil rights organizations that didn’t think it was part of their agenda.”

But even if the problems weren’t getting officially recognized, the idea of environmental racism was beginning to bubble up in certain parts of the country.

In 1987, the United Church of Christ’s Commission for Racial Justice, led by Benjamin Chavis, published a seminal report on toxic waste and race in the U.S. titled “Toxic Wastes and Race in the United States.” The report found that “three out of every five Black and Hispanic Americans lived in communities with uncontrolled toxic waste sites.” The authors wrote that their research exposed “a serious void in present government programs addressing racial and ethnic concerns in this area.”

Bullard was among the attendees of the four-day conference. The representatives drafted 17 principles of environmental justice that formed the foundation of the movement. The same year, several environmental justice pioneers co-signed a letter to the 10 largest white-led environmental organizations in the country, including the Environmental Defense Fund, the Natural Resources Defense Council and the Sierra Club.

The letter called out the lack of diversity among the groups’ staffs and boards of directors and in their missions.

Fred Krupp, who at the time was the executive director of the Environmental Defense Fund, said the moment was a wake-up call.

“When that letter was sent, our staff wasn’t diverse and our board wasn’t diverse,” he said. “It did cause us to stop and think about things differently.”

Those changes weren’t enough, said Krupp, who is now the president of the Environmental Defense Fund. The events of the past week have demonstrated that mainstream environmental groups have plenty more work to do — including efforts to rebuild trust in marginalized communities, he added.

“There’s a lot more room for us to partner with front-line groups and bring what we can to the table to support their work,” Krupp said. “That’s the way you build trust, because mere words or statements or social media posts are woefully inadequate.”

The NAACP is one of the groups with the biggest presences on the front lines of environmental activism. Bullard credits Patterson of the NAACP Environmental and Climate Justice Program with much of the progress that has been made in prioritizing climate justice as one of the civil rights group’s core missions.

Patterson said many climate change organizations and environmental leaders are still slow to fully embrace intersectionality as part of their mission. Part of the struggle likely owes to how the modern environmental movement evolved, she said.

“The roots of the traditional environmental movement came out of conservation of flora, fauna and wild spaces,” she said. “It’s a pretty big shift for these people to think about human rights and the ways that environmental racism affects communities.”

The concept of environmentalism, which can be traced to the late Middle Ages in Europe, was hardly built on principles of equality. Rather, early conservationists largely campaigned to keep forests and parks pristine for their own elite enjoyment, according to Joyce Chaplin, a professor of early American history at Harvard University.

“Overwhelmingly, the conservation that was done favored powerful people,” she said. “The classic example would be forests that were conserved for hunting game as private entertainment for aristocrats and monarchs.”

Similar dynamics drove conservation efforts in the U.S. in the early 20th century and influenced the thinking and research of early giants in the movement, including President Theodore Roosevelt and Gifford Pinchot, the man he named chief forester of the redefined U.S. Forest Service.

“The ideas about which communities benefit from conservation and national parks basically builds from old European logic about who is privileged enough to go walk among the trees,” Chaplin said.

That legacy persists today, whether or not people realize it, said Ayana Elizabeth Johnson, a marine biologist who is the founder and CEO of Ocean Collectiv, a science and policy consulting firm, and the Urban Ocean Lab, a think tank for coastal cities.

“There are so many people who care about justice and care about climate change, but they still don’t get it — they still don’t see the connection,” she said. “It’s not like the climate community has a problem with wild racists and horrible people. These are the good ones, and they’re still not quite there.”

Johnson wrote an essay last week in The Washington Post about the difficulties of existing beneath the layers of existential crises caused by climate change and racism. Climate change can’t be solved, she argued, without also addressing racial justice.

“I understand the instinct to want to focus just on climate change, because that’s already so complicated,” she said. “But that’s naive, because it implies that these issues are not inextricably interwoven.”

And the links can’t be overlooked, because many of the climate risks faced by black communities, and other communities of color, are magnified because of other deep-seated social and economic issues.

“When America has a cold, black folks have the flu,” said the Rev. Michael Malcom, executive director of Alabama Interfaith Power and Light, a religious organization based in Birmingham that aims to mobilize congregations throughout Alabama to address climate change.

In addition to helping communities build strategies to increase energy efficiency and shrink their emissions output, the organization also advocates for policy changes at the state level to combat global warming and environmental racism.

Malcom said his work in the community demonstrated that socioeconomic issues, health issues and climate issues can’t be divorced from one another.

“Three words connect it all: I can’t breathe,” Malcom said, referring to George Floyd’s final words as a white Minneapolis police officer dug his knee into his neck for more than eight minutes. “Whether it’s the pressure we’ve felt through policy or the violence we face from people who are supposed to protect and serve us or the brutality we face from pollution, it has always been ‘I can’t breathe.'”

But Malcom said this moment in history feels different, and he’s hopeful that mass protests in almost every major city in the country, as well as the widespread calls for reform, will lead to lasting change.

Bullard agreed, saying the intergenerational makeup of the people protesting and demanding change fuels his optimism. Youth- and student-led movements have played important roles in changing the course of the country throughout history, he added. And he is more than happy to welcome a new generation into the fight for environmental justice.

“I’ve been doing this for 40-plus years, and I’ve always said that when you fight for justice, it’s not a sprint, it’s a marathon,” he said. “But it’s actually more of a marathon relay. You run your 26.2 miles and then you pass the baton on to the next generation.”

Read the article on NBC News