Posted on August 12, 2019 Categories: Latest News No comments yet 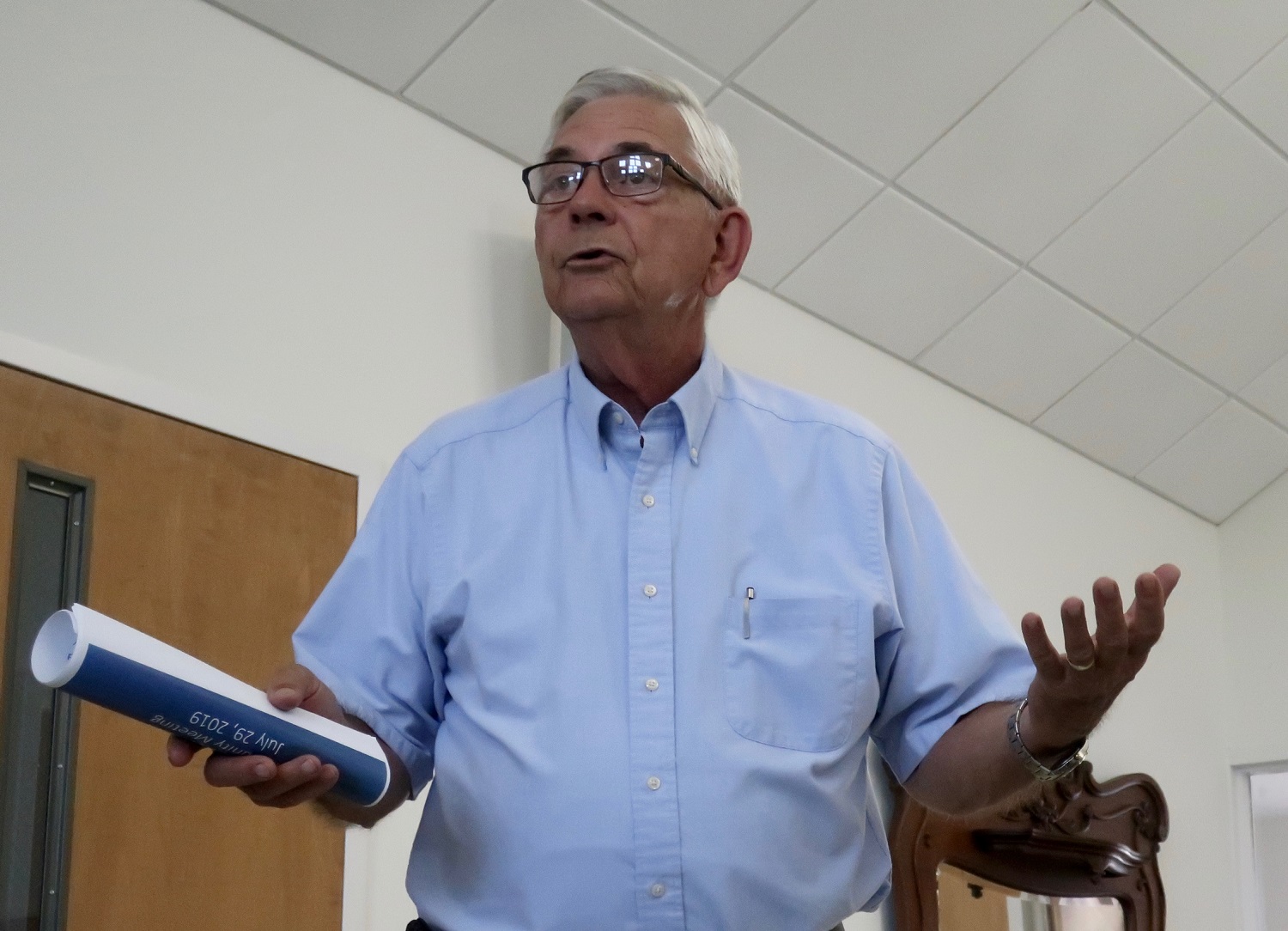 In early June, the small northern Wayne County town of Eureka, got its official warning letter from the N.C. Department of State Treasurer that, due to concern about how the town was handling its sewer system funds, the state intended to take over its finances and assume direct control of the town.

A month later, the department has made good on its promise, taking over the town’s accounts, impounding its books and financial records, and setting a new temporary budget for operations.

It’s not the first time the state has taken over a town with troubled finances, but under a new law and a new recovery program set up this year by the legislature, Eureka, first chartered in 1901, has become the test case for rescuing rural North Carolina’s struggling small towns.

In mid-June, with the state takeover imminent, the General Assembly rushed through approval of House Bill 336, sponsored by Rep. John Bell, R-Wayne, and Sen. Jim Perry, R-Lenoir, which suspends Eureka’s charter for five years, giving time for a reorganization plan to take effect.

Most of the reorganization effort will need to focus on finding a long-term fix for Eureka’s crumbling sewer system.

Eureka is now run from Raleigh by the state’s Local Government Commission, which has begun a pilot project to develop a template for how to address the dozens of failing small-town water and sewer systems across the state. 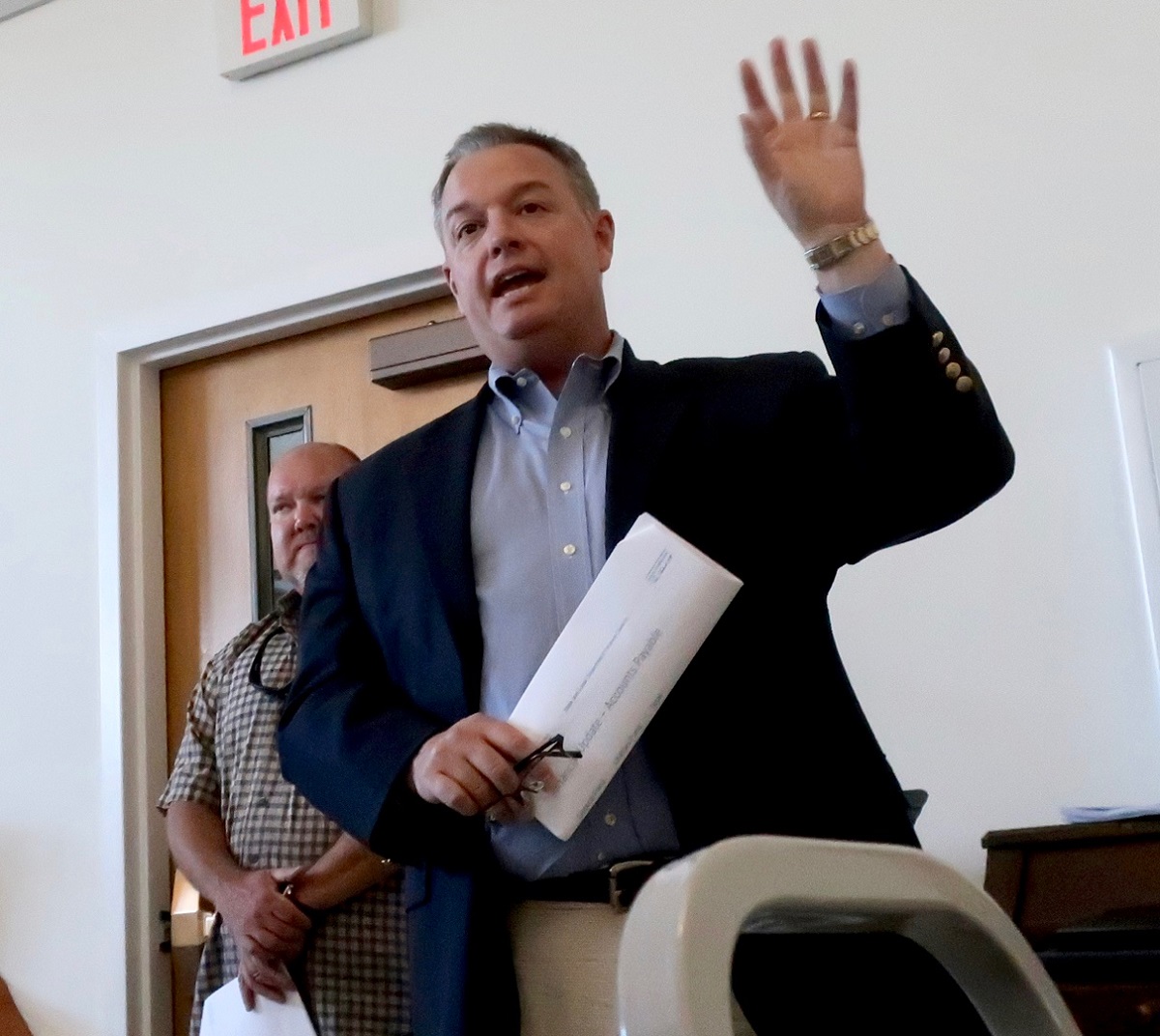 N.C. Sen. Jim Perry tells Eureka residents on July 29 that he sponsored legislation allowing the state takeover of their struggling town in order to give them a “fighting chance.” Kirk Ross / Carolina Public Press

Eureka takeover not just about one town

Like Eureka, in some cases, the problems threaten to not only bankrupt one community but could also pull down others.

In a recent interview, Bell told Carolina Public Press that Eureka’s problems are similar to those happening in other towns but were particularly critical because Eureka’s financial problems threatened to cascade onto its neighbors.

“It wasn’t just one town,” Bell said. Eureka is unable to pay its water treatment bills to neighboring Fremont, he said, which threatens that town’s finances as well as the city of Goldsboro, which treats some of Fremont’s sewage.

“You have three towns that could be affected,” Bell said.

Bell said the emergency legislation was necessary to buy time while a new system to rescue troubled water and sewer systems that’s in this year’s budget is put in place.

The lengthy budget provision is the result of work last year by an interim committee studying failing water and sewer infrastructure.

It’s a carrot-and-stick approach to develop and, in some cases, force long term fixes.

In exchange for a town or county agreeing to a solution, such as a merger with a larger system or combining with other smalls systems, the state would provide funds and expertise to address chronic backlogs in repairs and upgrades that are at the heart of most system failures.

Estimates of the scope of the problem vary, but roughly 90 communities are in financial trouble because of their water and sewer systems. Statewide, the total capital needs for water and sewer infrastructure for the next 20 years range as high as $26 billion.

In addition to the new program to encourage regionalization and mergers, the legislature set up a new “viable utility” reserve fund, budgeting an initial $9 million in each year of the biennium to pay for the first set of projects.

Rep. Chuck McGrady, R-Henderson, co-chair of the 2018 study committee that developed the new legislation, said that if a good template is developed, the legislature is likely to increase funding to take it to more communities.

He expects the solutions in most cases will involve some kind of regionalization among nearby water and sewer systems, but each solution will have to be localized.

“I don’t know what the template will look like. Every situation is somewhat different, depending on the geography, the financial situation, the water or sewer systems near the failing one,” he said. 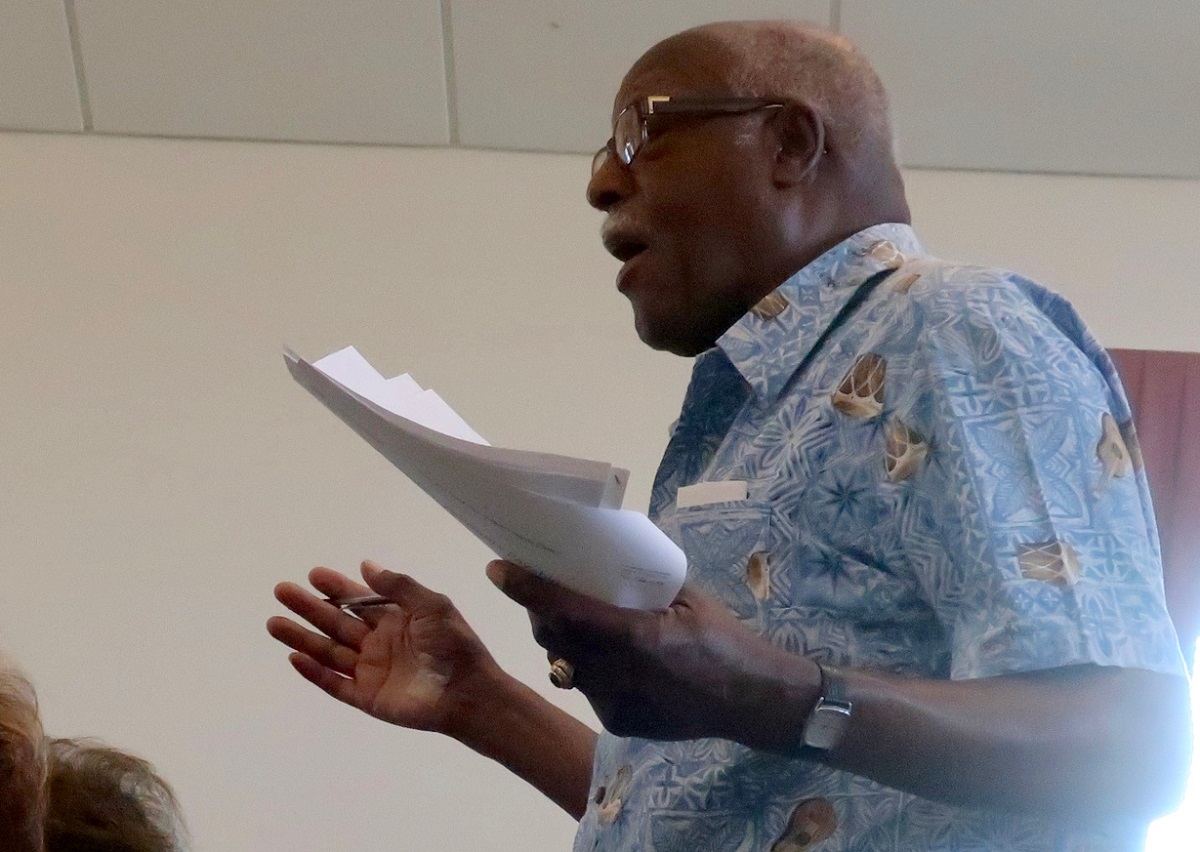 On a warm Monday night in late July, about 40 residents gathered in the fellowship hall of the Eureka United Methodist Church, which is just down from the intersection with N.C. 222. It’s about 15 winding miles north of Goldsboro and 8 miles through farmlands to Pikeville.

This time of year is harvest season, and on the roads, there’s a fleet of converted school buses hauling watermelons and other produce to market.

At the crossroads, there’s a historical marker noting the incident that put Eureka on the map. It marks the 1961 midair breakup of a B-52 carrying two nuclear bombs over the town. Three crew members died that day, and a tenuous set of safety systems narrowly averted setting off the bombs. One of the bombs was recovered intact, another disintegrated, and parts are still said to be buried around Eureka.

Like many small towns in eastern North Carolina at the time, Eureka was still growing. The 1960 census put the population at 246. The town’s population peaked at 303 about 20 years later.

The drop in population mirrored a drop in tax revenues and the acceleration of the town’s financial problems, and in 2006 it was first added to the Department of Treasurer unit assistance list.

The list is compiled each quarter by the department’s Local Government Commission, the official watchdog of the local government finances and local authorities.

At any time, of North Carolina’s roughly 1,300 local government entities, more than 100 make the list.

They can be listed for a range of reasons — some easy to fix, some endemic and seemingly unsolvable, from failure to send in required audit reports in a timely manner to improperly shifting money between accounts.

Water and sewer issues are by far the most common reason local governments are put on the list.

Eureka was added when it began using the town’s general fund to pay for water and sewer operations, which is not permitted under North Carolina law.

The town also got behind in paying Fremont for treating some of its sewage.

In Eureka’s case, lack of maintenance and upgrades had a big impact on the cost, particularly due to rainwater infiltration. Eureka’s typical monthly payment to Fremont is about $7,500, but a heavy rainfall could cause that to get much higher. Wet weather this March drove the town’s treatment bill up to $28,144, most of it for treating rainwater.

For the residents and officials of Eureka and Fremont who gathered at the church last month, the sewer system woes have been a long-running headache.

For the state officials now running their town, the challenge was convincing them this time would be different.

“Our goal is to disrupt your lives as little as we possibly can while we’re trying to figure out how to make this work,” Sharon Edmundson of the Treasurer’s Office told residents at the meeting.

The Local Government Commission is continuing to pay the town’s bills and payroll, she said, and has no plans to change the tax rate or disrupt garbage collection or any other town services.

A meeting for a longer term town budget, due in early September, is planned for later this month.

But the financial picture, Edmundson said, “is not pretty.”

The town takes in some money from tax distributions and other state funds but not enough to pay its bills. As of the end of July, it still owes $31,000 to Fremont in back bills for sewage treatment.

Edmundson said there will need to be some cutback, but where and by how much hasn’t been determined yet.

“We don’t want to take away anything, but right now the town is in a financial crisis,” she said.

Given the interconnection between the towns, the state will require a system that’s sustainable, not just a temporary fix, Edmundson said.

The interconnection between the towns is a critical piece of the puzzle.

“You can see if there’s a break anywhere in the money flowing the way it needs to, Goldsboro is the one holding the bag eventually,” she said. “It’s not just Eureka.”

Deputy Treasurer Greg Gaskins told residents that they were fortunate that the legislature had stepped in. The new legislation allows enough time to put a plan together. Otherwise, he said, the conversation would have been a lot different.

“There was a real risk that, following the current statute, we had would never have allowed us to have enough time to save the town of Eureka,” Gaskins said.

Without the legislation, he said, Eureka would “go away,” and the responsibility for water and sewer would fall to the county.

“So hopefully with this legislation and some money for us to bridge the gap, we have enough time to make a plan that works for the citizens of northern Wayne County.”

Gaskins said it will take about 12 months to pull a plan together.

That will involve talks with towns in the area about a regionalization plan as well as studies by the state Division of Water Infrastructure to assess the best methods and engineering requirements. After that, it could take two to three years for the upgrades and repairs to be completed.

Perry told residents that the legislature would set aside enough funds to fix the Eureka system and help set up a new regional system.

He said the decision about Eureka’s future would be up to the town. If residents want to move forward with a regional system, the town would have to negotiate on collaboration with other towns.

“This is about a level setting,” Perry said. “We’re not loaning you money. We’re not forcing you to do anything. We wanted to suspend the charter to give you a fighting chance to work your way out of this.”