Posted on August 23, 2022 Categories: Uncategorized Comments are off for this post

Birth in Warren County to Today & Beyond”

EVENT IS SOLD OUT!

You can still watch the video, get a wrap-around overview, and more at:

FREE webinar to wrap up the September commemorations of the 40th Anniversary of Warren County Protests.

This event will look at the birthing the EJ movement, where we are today, and the future.  Our guest speakers have decades of direct experience in the EJ movement and will share their experiences, lessons learned, and what work still remains for the future of EJ in Warren County, North Carolina, and Beyond.

Please visit our Eventbrite page for more details and to donate to support speaker organizations!

About Our Webinar and More on LOTS of Events Throughout September!

This year commemorates the 40th Anniversary of the birth of the Environmental Justice (EJ) movement! The terms “environmental racism” and “environmental justice” were coined during the 1982 protests in Warren County, NC, when a grassroots effort worked to block a cancer-causing PCB-laced landfill in the Afton community of Warren County with a supermajority of African-American residents. The proposed landfill was announced in 1978 and after four years of mounting scientific and legal challenges, the courts nonetheless allowed the applicable permits.  In 1982, residents protested for seven weeks and many participated in civil disobedience to block the trucks from bringing the toxic waste, leading to over 500 arrests, and so a movement was officially born.  The state still dumped the PCBs and a long history ensued.

For the month of September, several organizations have pulled together in hosting events and education to commemorate this momentous event that catapulted a movement and has carried through to our work today.  The main event is hosted by Warren County Environmental Action Team the weekend of September 17th & 18th in Warrenton, and Clean Water for North Carolina is offering a wrap-around finale on September 30th.

See below the flyer for details and links for each of these events and more! 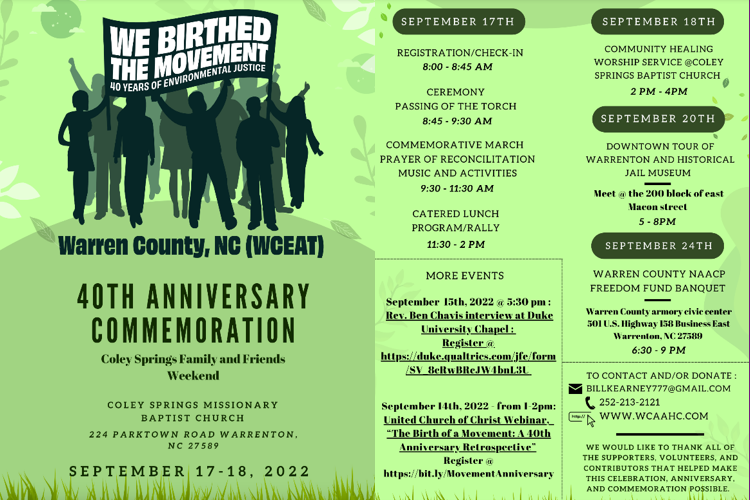 “The Birth of a Movement: A 40th Anniversary Retrospective” Webinar with Dollie Burwell, the Rev. Dr. Benjamin Chavis, Jr., and the Rev. William Kearney

Hosted by United Church of Christ

“We Birthed the Movement: 40 Years of Environmental Justice” A 40th Anniversary Commemoration

“40 Years of Environmental Justice: Birth in Warren County to Today & Beyond” Webinar 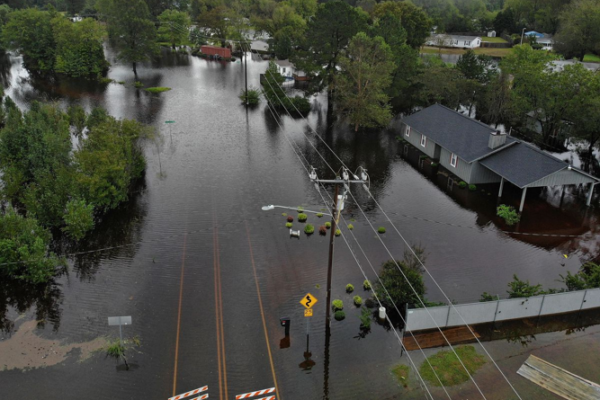 Say NO to Duke’s Carbon Plan!