Posted on July 22, 2022 Categories: Latest News Comments are off for this post 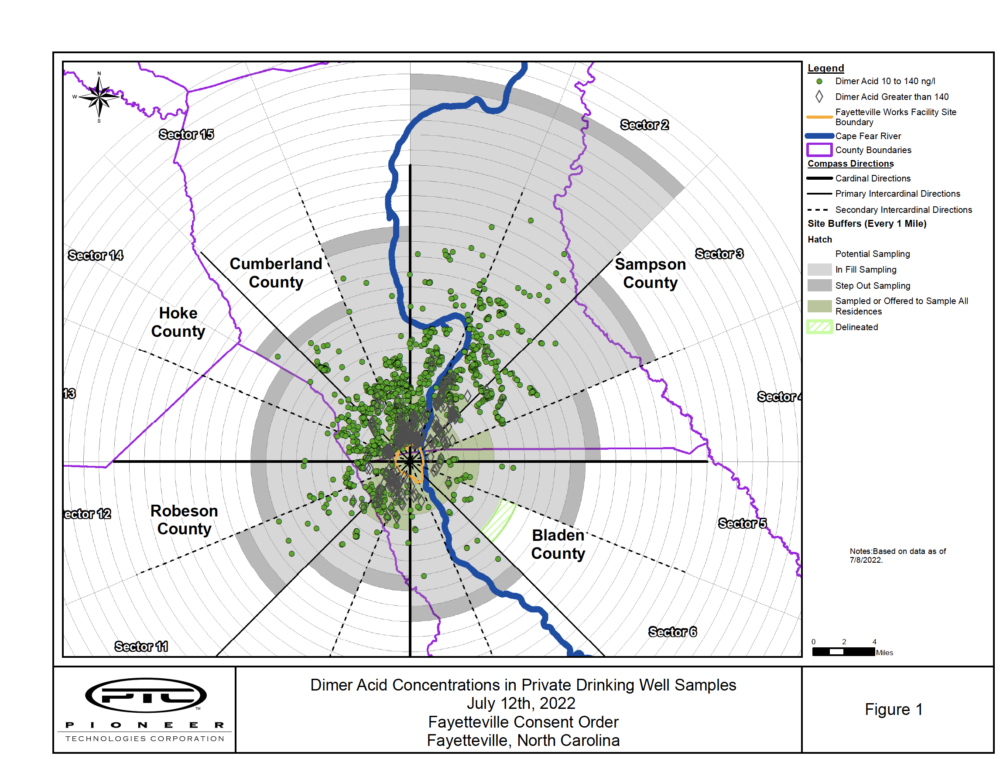 Chemours told the NC Department of Environmental Quality this week that it would offer replacement water supplies to more North Carolinians whose wells are contaminated with GenX, but was vague as to whether it would continue to do so if the company wins a federal court case.

In a July 13 letter from Chemours plant manager Dawn Hughes to DEQ, she wrote that the company “reserves its rights to take appropriate actions …  based upon the results of the pending federal litigation, including in the event EPA’s Final Advisory is found to be invalid.”

Chemours, which operates its Fayetteville Works plant near the Cumberland/Bladen county line, is responsible for contaminating public and private drinking water supplies in the Lower Cape Fear River Basin with GenX. An estimated 800,000 people who live in the basin have been affected.

Exposure to GenX has been linked to myriad health problems: including reproductive problems, low birth weight, high cholesterol and several types of cancers. The new EPA toxicity assessment said the liver “is particularly sensitive” to the effects of GenX.

As part of a 2019 consent order between DEQ, the company and Cape Fear River Watch, Chemours must offer alternative water supplies to private well owners whose water tests either  greater than 140 parts per trillion — the state’s health advisory goal at the time — or above EPA thresholds, even if they change.

Last month, the EPA sharply reduced its goal to 10 ppt; it was originally 70 ppt. Chemours has challenged the EPA’s scientific basis for the new goal in a petition to a federal court. A health advisory goal is not legally enforceable, but it is among the steps toward a national drinking water standard, which is law.

Nonetheless, the more stringent threshold legally forces Chemours to offer alternative water to more than 1,500 private well  owners in North Carolina whose drinking water contains levels of GenX between 10 ppt and 140 ppt. In her remarks to the Environmental Management Commission yesterday, Assistant Secretary for the Environment Sushma Masemore said 1,545 well owners could be eligible, based on Chemours estimates. That number has since been updated to 1,697 residences or other properties in Cumberland, Bladen, and Robeson counties.

Policy Watch reported yesterday that the cost of installing, operating and maintaining these replacement water systems could cost Chemours $200 million, based on the maximum amount per customer, as laid out in the consent order.

Regardless of the federal court’s decision, which could be months away, Assistant Secretary Masemore reiterated to Chemours that it must immediately begin complying with the updated health advisory goals.

In a letter dated July 14, Masemore responded to Chemours:

.. the Department wishes to make clear its position that the Consent Order is unequivocal in requiring Chemours to provide replacement drinking water supplies in the form of public water or whole building filtration systems to parties with private drinking water wells impacted by EPA’s new health advisory, which is now in effect and applicable.

This requirement is of real and immediate importance to parties whose wells have been contaminated by pollution from the Fayetteville Works Facility. Affected parties must be assured that the replacement drinking water supply provisions in the Consent Order will be fully and timely implemented.”

Chemours itemized to DEQ the status of replacement systems. This does not include households downstream, such as in New Hanover and Brunswick counties, who are connected to public systems.

DEQ is hosting a public meeting on Tuesday, July 26 about the impacts of the new EPA goals on private well owners. The meeting will be held at the Crown Theatre, 1960 Coliseum Drive in Fayetteville, at 6 p.m.