Posted on August 25, 2021 Categories: Latest News No comments yet 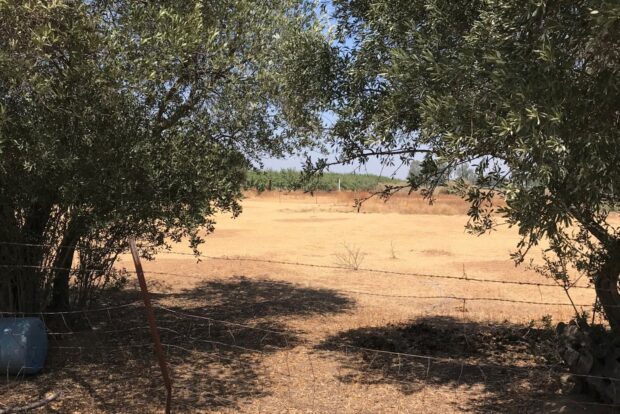 Though it was a sudden death, happening overnight during a record-smashing June heat wave, the demise of Maralee and Noal Childs’s household water well was not entirely unexpected.

The Childses live in Glenn County, an agricultural area of northern California that is latticed with irrigation canals and blanketed with almond and walnut orchards. A relentless interval of hot, dry weather, made worse by the buildup of heat-trapping gases in the atmosphere, has turned this section of the state into a cauldron of flame, dust, and smoke. To the east, burning across four counties, is the uncontained Dixie Fire, now the state’s second largest on record after having scorched more than 501,000 acres. Just south of the fire is Lake Oroville, a key reservoir for the state water supply that is now lower than at any time in its six-decade history. There is not even enough water in the reservoir to spin hydropower turbines to generate electricity. And to the west, in Mendocino County, coastal towns fret about dry taps, while the Russian River is so depleted that state regulators have told grape growers not to withdraw any water from it.

The signs of ecological stress from this drought course through the Childs’s rural neighborhood, located eight miles northeast of the town of Orland. A nearby creek hasn’t held water for nearly two years, a sign that groundwater levels were dropping. They bought their house and 10-acre property in 1985, a month before they were married. The well itself is even older, dating back more than a century. As far as they know, across 106 years it had never run dry. Until the night of June 16.

“It just dried up overnight,” Maralee told Circle of Blue. “One night it was pumping perfectly fine.” When she went to bed there were no signs of sediment in the water and no wavering of the water pressure. “And the next morning there was no water.”

Unsurprisingly in this drought, California households have experienced an epidemic of dry wells. A state registry has received 467 reports of water failures this year, about half of those coming in the last 30 days as summer’s heat increases water demands. Thousands of wells in the state went dry in the previous drought, in 2014 and 2015, mostly in the southern San Joaquin Valley. This time, though, a new center of pain has developed in the north, and it is spreading across Glenn County.

For those whose wells have gone dry, getting water is a costly chore. As a stopgap measure for drinking water needs, the Glenn County Sheriff organized bottled water distributions throughout July.

Bottled water only goes so far, when people have to bathe, clean dishes, flush toilets, and do laundry. For larger water needs, some people are having water delivered to their homes in tanker trucks. Orland officials have opened a bulk water filling station, supplying city water at $10 per 1,000 gallons. But this is only part of the cost. A 2,000-gallon potable water tank could run $1,500 or more.

The water also has to be transported by a certified operator, and they charge for the service. Chuck Staley runs Gandy-Staley Oil Company, which has a state license to haul potable water and operates mainly in Glenn County.

Staley told Circle of Blue that he charges by the hour for the services of his 3,200-gallon truck. He estimated that a full delivery, including the cost of water, would run about $350. “We’re busy,” Staley said. He figured his truck makes a couple water deliveries every day. “Orland is having a bad time right now.”

Another possibility is drilling a new well or deepening an existing one. Though expensive — as much as $20,000 per well — it’s such an appealing option that everyone wants in and there aren’t enough drillers to meet demand.

Maralee said that she called every well drilling company in the area without much success. Many didn’t even answer the phone. Finally, in late July, some six weeks after the well gave out, she was able to get on a waiting list. The company told her they could do the job sometime in the middle of next year.

Calls and messages that Circle of Blue left with drilling companies were also generally not returned. “We’re extremely slammed at the moment,” said Scott Silverthorn of Silverthorn Pump and Drilling, the only driller to answer the phone, though he said he had no time to respond to questions.

The home of Maralee and Noal Childs sits amid nut orchards some eight miles northeast of Orland, California. Photo courtesy of Maralee Childs

In this time of need Glenn County officials are looking to higher levels of government for assistance. Don Rust, the director of planning and community development, said that his staff have had discussions with the U.S. Department of Agriculture and the State Water Resources Control Board about funding programs that could connect people with dry wells, particularly around Orland, to municipal water service. The state also has grant programs for home water tanks, bottled water delivery, and well repairs.

The Childses feel lucky with their situation. When their well went dry they had no water in the house for about a week, except for regular deliveries of spring water, which they buy due to their concern over nitrates in the well water. Maralee showered at the gym and Noal took a bucket shower outside. They ate meals on paper plates.

Noal went to work trying to coax water from an old irrigation well on their property that they had used for growing wine grapes. Their last crop was harvested 21 years ago and they hadn’t operated the well since then. The irrigation well, at 168 feet, is a little deeper than the household well, which was drilled to 100 feet. Luckily the pump on the irrigation well still had some life — “We were all kind of amazed,” Maralee said — and the Childses were able to hook it into their home’s plumbing.

Now that they have running water again, the Childses are thinking about how things went wrong. It’s hard not to look across the street and cast blame in that direction. Maralee said in the days before their well went dry the orchards were irrigating around the clock, in anticipation of the 110-degree days that were forecasted. Ag wells are long straws, typically extending several hundred feet underground, a depth that allows them access to water even as shallower domestic wells fail. Another stressor is that the winter was so dry, Noal said, that farmers had to irrigate during what would typically be recovery time for the aquifer.

Maralee and Noal aren’t the only ones pondering agriculture’s impact on dry wells. On June 22, the Glenn County Board of Supervisors placed a 45-day moratorium on permits for new agricultural irrigation wells. On August 3, the Board extended the moratorium to last a full year, until June 22, 2022. Public debate before the vote centered on whether Big Ag was being targeted unfairly as the bad guy. The moratorium does not apply to new household wells like the Childses hope to have drilled.

These questions are relevant statewide. California’s groundwater act, signed into law during the previous drought, requires sustainable use of aquifers. If wells go dry because of farm irrigation, how should state and local agencies respond? Large-scale restrictions on irrigation would harm the economic engine of many Central Valley counties. Farm sales in Glenn County, for instance, generated $855 million in 2019. Maybe there’s another way. An analysis of two basins in the San Joaquin Valley found that it would be more beneficial to use state emergency funds to drill deeper domestic wells or to connect rural homes with dry wells to public water systems. These are imperfect fixes, though. Deeper wells can be more costly for homeowners to operate, while a connection to a public water system means a monthly water bill, perhaps for the first time.

The Childses worry about both the months and years ahead. In the long term, they wonder about their property value if water is unreliable. Will even a 300-foot well be sufficient? More immediately, they question whether the irrigation well will continue to produce water until their name comes to the top of the 12-month wait list for a new well.

“Every time you turn the water on, you kind of cringe because we know for a fact we only dropped the pump 42 feet,” Noal said, referring to the increased depth of the irrigation well. What they don’t know is how the well will respond if the coming months are dry. It’s one of many unknowns that rural residents of Glenn County now confront. Noal added: “We’re hoping we can survive until the middle of next year.”

Read the article on Circle of Blue