Posted on August 3, 2022 Categories: Latest News Comments are off for this post 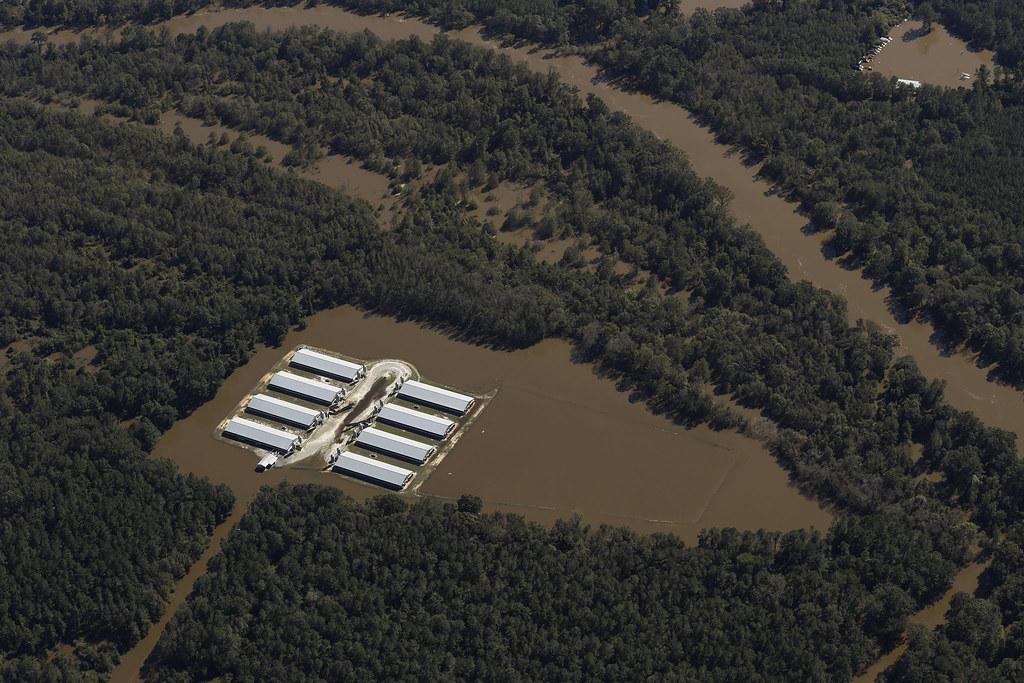 Back in May, North Carolina Gov. Roy Cooper (D) called on the Republican-controlled state legislature to include $18 million in the new state budget to fund the state’s Swine Floodplain Buyout Program. Created in 1999 in response to devastating floods from Hurricane Floyd that sent enormous amounts of hog farm pollution into communities and waterways, the program buys out owners of farms in low-lying areas prone to flooding.

But the budget passed by the legislature — and signed into law by Cooper on July 1 — does not include funding for the program.

"This is one of many examples of this industry wielding political power at the legislature," said Brooks Pearson, legislative counsel at the Southern Environmental Law Center (SELC) in Chapel Hill. The nonprofit law firm has long fought to protect communities from hog farm pollution.

The hog industry has been a mighty political force in North Carolina for decades now. Since 2000, hog farmers and other meat industry interests have contributed more than $5.6 million to North Carolina state candidates, as Vox recently reported. In addition, several legislators themselves are farmers who champion the industry’s interests.

The buyout program's funds have also been used to close hog farms' notoriously smelly "lagoons" — massive, open pits used store animal waste, including feces, urine, and blood. When lagoons get full, the contents are typically sprayed onto nearby fields, risking runoff into waterways while making life miserable for nearby residents. And while the lagoons pose a particular risk during hurricane season, they can overflow at any time due to lack of maintenance coupled with weak regulatory oversight.

In December 2020, for example, a lagoon failure at DC Mills Farm in Eastern North Carolina’s Jones County spilled 1 million gallons of hog waste into a tributary of the Trent River. The farm raised pigs for Smithfield Foods, a Virginia-based food-processing company that's owned by the Chinese conglomerate WH Group. The North Carolina Department of Environmental Quality (DEQ) had previously cited DC Mills Farm twice for lagoons being over capacity.

"It's not necessarily a matter of if there will be another devastating hurricane in Eastern North Carolina," Pamlico-Tar Riverkeeper Jill Howell told Facing South. "We see climate change manifesting in smaller ways. When three or four inches of rain is dumped all at once — and that's not an event here in Eastern North Carolina, it happens all the time — it causes serious localized flooding."

For a time, environmental advocates were encouraged by farmers’ interest in the Swine Floodplain Buyout. In all, the state has spent nearly $19 million to halt operations on 43 swine farms. But in 2007 — the same year the legislature made its 1997 moratorium on swine farms permanent — it stopped funding the program. More than 100 farmers who applied were sent away empty-handed.

"There are very few things that environmental advocates and operators at CAFOs agree on, but it feels like a swine buyout may be one of them," Howell said.

Though the state's hog farms remained under scrutiny after a series of hurricanes and lagoon breaches, the buyout program did not resume until 2018, when Hurricane Florence sent animal waste from 46 lagoons flowing into communities and waterways.

Twenty-three farmers applied for the last round of buyout funding, but there was only enough money to close three to five facilities, according to the state Soil and Water Conservation Division. The number of farmers volunteering for the program consistently outpaced the funding, leaving the communities most impacted by the industry vulnerable to disaster.

"Every time this program gets funded, there are more applications than there is money to cover it," Pearson said. "The wall we typically hit is Steve Troxler."

Troxler, North Carolina’s elected Republican agriculture commissioner, campaigned on making agriculture a $100 billion industry in the state. At the same time, his campaign is heavily supported by agricultural interests, with the North Carolina Pork Council and Smithfield Foods among his top donors, according to FollowTheMoney.org.

Given current political realities, Pearson thinks any policy proposal that reduces the number of hogs in North Carolina likely isn’t going to fly. The entire legislature is up for election this year, but it will be elected using GOP-drawn maps favorable to the GOP. For Republicans to retake the supermajority and override Cooper's veto, they need to gain three seats in the state House and two in the Senate.

Meanwhile, new pressure is building to keep hog waste lagoons in operation thanks to the state’s energy companies. In 2020, Smithfield Foods and Virginia-based Dominion Energy proposed the largest swine waste-to-energy project in North Carolina. The $500 million project would involve capping waste lagoons to collect methane gas, which would then be processed and transported via pipeline and sold to Piedmont Natural Gas.

"It's the poster child for greenwashing," said Blakely Hildebrand, a senior attorney with SELC. "Industry is holding up biogas as this silver bullet to the climate crisis for the agricultural industry. And it is far far from that."

As powerful industries team up to continue polluting, the resulting pain is disproportionately borne by residents of North Carolina’s environmental justice communities. A growing body of public health research shows that people who live closer to industrial animal operations get sick more often, stay sick longer, and die more often than people who live further away. And census data shows between a quarter to a third of residents of the state’s major pork-producing counties are Black and around a quarter of are Latinx. In Robeson County, home to both hog and poultry farms, nearly 42% of residents are Native American and 23% are Black.

Despite the environmental health risks, the DEQ issued permits to four farms to begin biogas operations at the beginning of this year — a move that many advocates saw as environmental racism.

"There’s lots of talk about how covering lagoons will be good for odors and for flooding related things," said Howell. "But what nobody talks about is how building out natural gas infrastructure does nothing to reduce the number of open air lagoons in Eastern North Carolina."

Read the article on Facing South