Clean Water for North Carolina > Blog > Latest News > The Most Detailed Map of Cancer-Causing Industrial Air Pollution in the U.S.

The Most Detailed Map of Cancer-Causing Industrial Air Pollution in the U.S.

Posted on November 8, 2021 Categories: Latest News Comments are off for this post 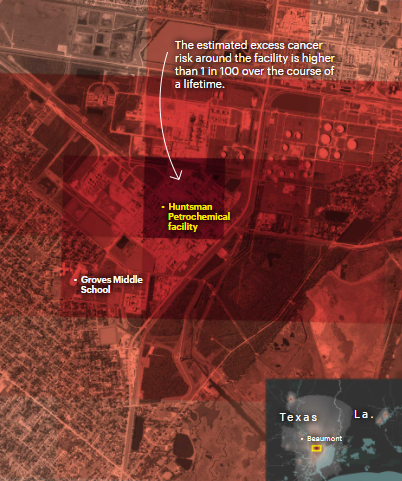 A new ProPublica analysis shows for the first time just how much toxic air pollution they emit — and how much the chemicals they unleash could be elevating cancer risk in their communities.

ProPublica’s analysis of five years of modeled EPA data identified more than 1,000 toxic hot spots across the country and found that an estimated 250,000 people living in them may be exposed to levels of excess cancer risk that the EPA deems unacceptable.

The agency has long collected the information on which our analysis is based. Thousands of facilities nationwide that are considered large sources of toxic air pollution submit a report to the government each year on their chemical emissions.

But the agency has never released this data in a way that allows the public to understand the risks of breathing the air where they live. Using the reports submitted between 2014 and 2018, we calculated the estimated excess cancer risk from industrial sources across the entire country and mapped it all.

Read the article on ProPublica

Click on a hot spot or browse the map to learn more about the industrial emissions there, or type in an address to find the increased estimated cancer risk at that location.