Posted on December 15, 2020 Categories: Latest News Comments are off for this post

By: Michael Sainato, The Guardian

Elsie Herring of Duplin county, North Carolina, lives in the house her late mother grew up in, but for the past several decades her home has been subjected to pollution from nearby industrial hog farms.

“We have to deal with whether it’s safe to go outside. It’s a terrible thing to open the door and face that waste. It makes you want to throw up. It takes your breath away, it makes your eyes run,” said Herring.

She explained they also deal with constant trucks on the road, hauling pigs, dead and alive, in and out of the area, feed trucks, and the flies and mice that the farms attract.

Eastern North Carolina has about 4,000 pink hued pools of pig feces, urine and blood as a result of the hog industry, where 9m pigs produce over 10bn gallons of waste annually in the state. When the waste lagoons reach capacity, excess waste is sprayed on to nearby fields. In 2000, Smithfield Foods agreed with state officials in North Carolina to finance research to find and install alternatives to the waste lagoons and spraying systems, but none were deemed economically feasible.

But now – instead of implementing safer waste systems – Smithfield Foods is pushing to use the hog waste lagoons to collect, transport and sell the methane gas they produce. That terrifies many local people and environmental activists who see it as seeking to profit from an ecological problem rather than fix it.

“It only lines their pockets. They’re trying to sell it as renewable energy. It’s only renewable if pigs continue to poop, which is why I’m afraid they’re going to push the moratorium on new hog farms, because if you have that great of a demand, you have to supply to meet it,” added Herring.

“They’re not treating the waste, they’re converting it, so how is that hog waste ever clean?”

The North Carolina Department of Environmental Quality is considering the first permit approval for an industrial-scale biogas project in North Carolina, which would cap waste lagoons from industrial pig farms in the state, capturing the methane and transporting it through pipelines to a processing plant.

The product, called biogas, is being proposed by a $500m joint venture between Smithfield Foods and Dominion Energy, Align RNG, as a solution to the hog waste pollution problems plaguing North Carolina, but residents and environmental organizers are raising concerns that the project will worsen the problem. 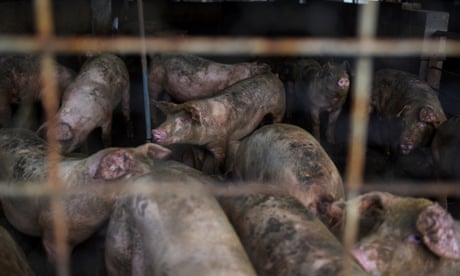 “The biogas is a false solution,” said Naemma Muhammad, a community organizer and resident of Duplin county. “It doesn’t solve the problems we’ve been dealing with for three decades, which is to get rid of the lagoons and spraying systems so people can breathe and enjoy their property in the way they intended. We don’t need anything to encourage this industry to continue business as usual.”

The Grady Road Project includes trapping methane gas at 19 industrial hog waste sites in Duplin and Sampson counties in North Carolina, where over 30 miles of pipelines will be constructed to a central processing facility and distributed through existing natural gas pipelines. Duplin and Sampson counties are the top-hog producing counties in the US. The project is one of several biogas proposals being pushed by Smithfield and Dominion Energy.

Muhammad noted residents still don’t know where the 30 miles of pipeline will be laid or which waste lagoons will be used for the project, and the pipelines will pose greater risks of spills and leaks to the wetlands and groundwater in the region.

The methane capturing also produces other pollutants, posing greater risks to nearby communities when waste is sprayed on fields and spills are common, especially during strong storms.

“The process creates excessive concentrations of ammonia by extracting the methane,” said Sherri White-Williamson, the environmental justice policy director of North Carolina Conservation Network. “This is another way for the industry to be able to keep the lagoon sprayfield system in place. This is not a good system and to continue to find ways to justify keeping that system in place makes no sense.”

The waste produced by the industry has a long documented impact on the health, living conditions and pollution of communities near these hog farms, recognized as environmental racism as Black people, Native Americans and Latinos are more likely to live there than white people, according to a 2014 study by researchers at the University of North Carolina at Chapel Hill.

Living in the vicinity of a hog industrial operation has been linked to chronic illnesses such as asthma, anemia, kidney disease, certain cancers and high blood pressure.

“Methane aside, hundreds of other air and water pollutants remain uncaptured and are emitted untreated by the lagoon and sprayfield system to the environment and the communities which surround these facilities,” said Ryke Longest, the co-director of the Environmental Law and Policy Clinic at Duke University.

Will Hendrick, the staff attorney for Waterkeeper Alliance, noted North Carolina’s senate bill 315 passed in 2020 removed environmental standard requirements to pave the way for proposals such as the biogas project, despite other existing and cleaner technologies to produce biogas.

Those standards called for new or modified permits to address five environmental problems with hog waste, including the elimination of animal waste discharge to surface water and groundwater, and substantially eliminating ammonia, odor, disease transmitting vectors, and nutrient and heavy metal contamination.

“The biggest problem with their biogas proposal is it fails to address those five long known well-documented problems,” said Hendrick. “Now suddenly they have money to invest in waste management technologies, but are conveniently overlooking their commitment to the people of North Carolina.”

The hog industry tried to appeal nuisance lawsuits won by residents in North Carolina over the effects of waste and odors from hog industry farms, and North Carolina legislators passed laws in response to the lawsuits limiting the ability of residents to sue the industry. A federal court recently upheld the verdict, in which a federal judge noted there was ample evidence farming practices persisted despite known harmful effects to neighbors. Herring was a party to that suit.

According to the North Carolina Department of Environmental Quality, a decision on the permit application will be decided within approximately 30 days after the hearing, which will be scheduled after 20 November.

“We care about their health and the health of our environment. That’s why we started this project in the first place, to improve the region’s air quality and protect the climate for future generations,” said a spokesperson for Dominion Energy. They claimed the project will reduce emissions in the area by more than 150,000 metric tons a year.

“We will continue reaching out to make sure everyone’s voice is heard and everyone has the facts. The community has our pledge we’re going to do this the right way.”

Read the article on The Guardian