Posted on June 25, 2019 Categories: Latest News No comments yet 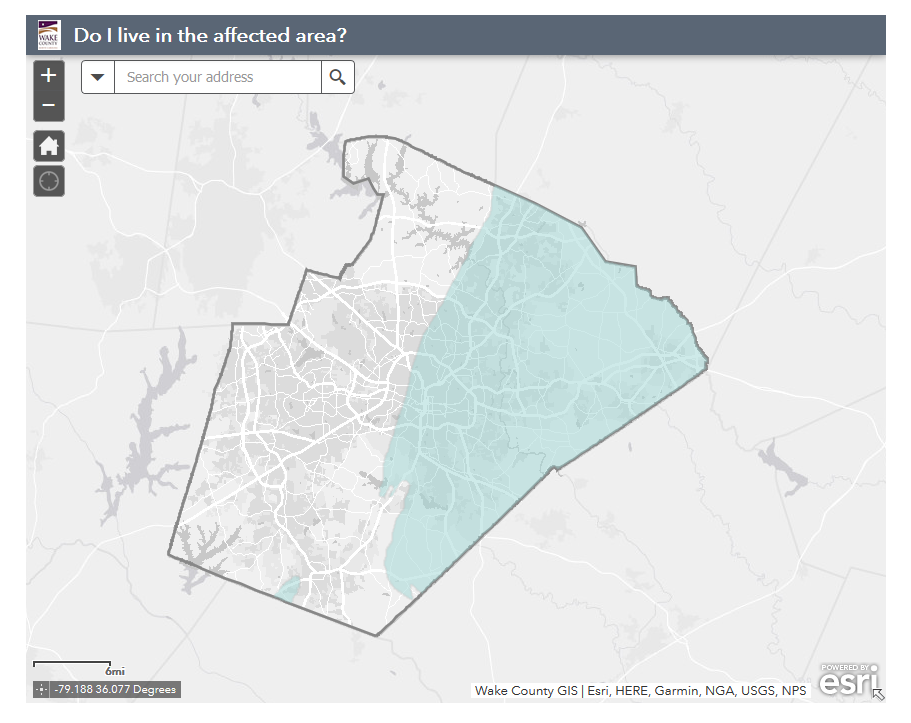 Wake County is notifying thousands of households on private wells that their drinking water may have unhealthy levels of radiological chemicals like uranium and radon.

An estimated one in five private wells in eastern Wake County may exceed safe drinking-water standards for some chemicals, officials said at a Monday news conference. They plan to notify 19,000 property owners by mail starting this week.

People don’t need to panic, said Evan Kane, the county’s groundwater protection and wells manager. The best next step is to get private well water tested, he said.

At least one household has 20 times the acceptable level of uranium in the water, Kane said.

As previously reported by The News & Observer, Wake County first learned of the high levels of unhealthy chemicals in 2010 after a water sample from southeast Raleigh showed high levels of uranium.

From 2010 to 2014, the county tested about 400 wells and found the high levels of unsafe chemicals. Some people began getting notified in 2016; mass notifications didn’t start until this week.

In a previous interview, Kane said the county didn’t have enough staff to meet the demand for testing if everyone was notified. To address that concern now, Wake County will only test wells of people with limited income. See details below.

WHAT UNHEALTHY CHEMICALS ARE IN THE WATER?

The contaminants are odorless, colorless and tasteless, and the only way to know if they are in a well is by testing the water.

HOW DID THEY GET THERE?

The chemicals are naturally occurring in the granite that covers the eastern part of the county. It is not caused by humans or industry.

Wake County has already encountered two people who were sick, possibly from their water. The county was told their doctors asked that their well water be tested and that the water was believed to be related to their illness, Kane has said previously. On Monday he said the county hasn’t heard of any new sick people.

WHAT DO I DO IF I GET ONE OF THESE MAILERS?

Wake County is sending 19,000 mailers to property owners in the area likely to have wells with unsafe levels of uranium, radon and radium in the water.

If you get water from a municipal water system or community well, you can ignore it.

If you have a private well, Wake County recommends you get your well water tested.

WHERE DO I GET MY WELL TESTED?

Wake County lists three locations to get well water tested in its mailer:

The test will likely cost more than $150.

The N.C. Division of Public Health lists certified drinking water laboratories online at bit.ly/nc-labs. People should select “uranium,” “gross alpha and gross beta” and “radon” as the chemicals to test for.

The county is also able to do well tests but only has capacity for people who cannot afford private well water testing.

WHAT IF I CAN’T AFFORD TO GET MY WELL TESTED?

HOW CAN I FIX MY WELL?

It will likely be expensive.

Depending on the chemical, it could cost $1,500 to install a reverse osmosis system to treat water coming in through the kitchen to $5,000 to $15,000 to install a system that treats the entire house.

Residents could also choose to drink and cook with bottled water, Kane said.

CAN THE COUNTY FORCE ME TO FIX MY WELL?

HOW MANY WELLS ARE AFFECTED?

HOW CAN I GET MORE INFORMATION?

WHAT IF I HAVE A WATER BILL?

That means you likely get water from a community wells or a municipal water system. Those water systems are required to be regularly monitored. There’s no such requirement for privately owned wells.

WHAT IF I AM BUILDING A HO– USE OR ADDING A WELL TO MY PROPERTY?

Wake County changed its rules in February 2019 to require radiological testing for new wells in the eastern part of the county. Wake County permits about 400 new wells each year.

WHAT IF I JUST BOUGHT A HO– USE WITH A WELL IN THE EASTERN PART OF THE COUNTY?

Testing the home’s well is not required when selling or purchasing the property.

“We encourage homebuyers to complete a thorough round of home inspections to ensure they are comfortable, familiar and understand the condition and needs of the home they are purchasing,” said Renee Smith, Realtor with Fonville Morisey Realty and president of the Raleigh Regional Association of Realtors. “It is best to know in advance of closing, which still allows time for decision making and negotiations between the seller and buyer to ensure satisfied clients on both sides of the transaction.”

Home inspections, radon testing, well testing and other tests are common and regularly completed as part of a buyer’s due diligence process, she said.

Read the full article on the Raleigh News & Observer