Posted on November 2, 2021 Categories: Latest News Comments are off for this post 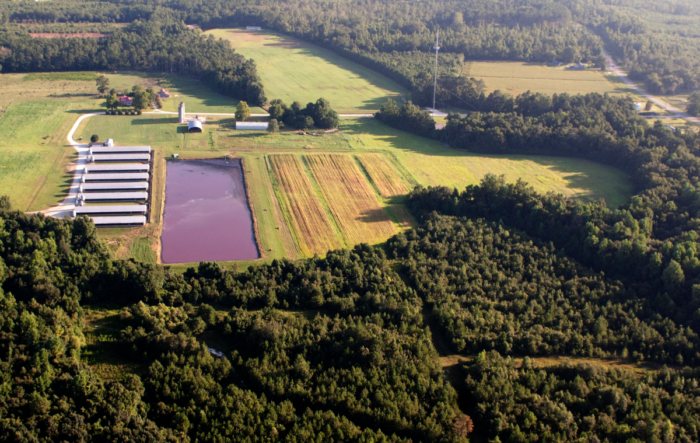 A complaint about pollutants from hog farms filed last month with the U.S. Environmental Protection Agency alleges that the N.C. Department of Environmental Quality’s issuing of biogas permits to four hog farms will have a disproportionate impact on communities of color in the surrounding area.

North Carolina environmental and civil rights advocacy groups argue that if the biogas operations are allowed to operate, pollutants from the operations will affect the communities of color surrounding the hog farms.

Biogas production is both a side business for hog farmers and a treatment option to reduce methane emissions from hog waste, said Mahmoud Sharara, assistant professor in the biological and agricultural engineering department at N.C. State University.

Farmers collect hog waste, treat the waste to produce biogas and sell that biogas as renewable natural gas to bidders.

“The (hog) industry should not be moving backwards and creating more harm for communities,” she said. “It’s time that these communities are protected from the pollution from these hog operations.”

In March, the DEQ issued biogas permits to four hog farms, all owned by Smithfield Foods, according to a press release from DEQ.

Jim Monroe, a Smithfield spokesperson, said he does not think the biogas practices are harmful.

“Turning methane from hog farms into clean energy is an innovative, sustainable practice and an absolute win for North Carolina, the communities where Smithfield operates and the environment,” he said.

Monroe cited North Carolina’s Clean Energy Plan as evidence that biogas production has great potential to reduce methane emissions. Ordered by Gov. Roy Cooper, the DEQ produced the plan to outline and recommend clean energy technologies to address climate change and transition to a clean energy economy, according to the plan.

Instead of allowing methane from livestock waste to enter the atmosphere, biogas production can capture methane and convert it into carbon dioxide, reducing the global warming impact, the plan reads. Methane is 25 times more potent than carbon dioxide.

In April, the SELC also challenged the permits themselves in the N.C. Office of Administrative Hearings on behalf of the Environmental Justice Community Action Network and Cape Fear River Watch, Hildebrand said. The litigation is ongoing.

Microorganisms break down the waste, releasing methane in the process, he added. Farmers capture the methane and send it through pipes to a conditioning facility where the methane is converted into renewable natural gas.

After it meets standards, the facility injects the gas into existing natural gas pipelines.

In total, the Smithfield hog operations in Duplin and Sampson counties house more than 55,000 hogs, making them the state’s largest hog producers and the second-biggest in the country, Monroe said.

The DEQ also approved all facilities for a sprayfield system, according to permits available on the NCDEQ website.

One method to empty a lagoon is by pumping the waste out using an irrigation system that feeds the waste into an irrigation cable attached to a drag reel on wheels, Sharara said.

At the end of the irrigation cable, a large spray gun shoots out the waste onto a surrounding field, but the waste has been pressurized into a finer liquid, he said.

Before the waste can be sprayed, farmers have to send individual samples of each lagoon to either the N.C. Department of Agriculture & Consumer Services or a DEQ-approved lab for testing.

The soil type, crop to be grown and chemical makeup of the lagoon waste all determine how much can be sprayed on a particular field, said Stephanie Kulesza, assistant professor in the crop and soil sciences department at NCSU.

“We want to manage the nutrients in a way that’s agronomically necessary to get good yields of our crops, but we also want to minimize environmental impacts,” she said.

Both the biogas procedure and sprayfield system come with a high risk for the local communities, Hildebrand said.

Covering the lagoon to produce biogas can increase ammonia emissions that contaminate the air, she said. Likewise, the spraying of untreated waste onto the surrounding fields can contaminate the land and water if not done properly.

“The use of animal waste lagoon systems for biogas operations increases concentrations of phosphorus, nitrates and ammonia,” the plan says.

“There are public concerns that odors and other pollution from confinement houses and sprayfields are not adequately addressed by current methane capture technologies.”

The communities near the heaviest concentration of large hog farms also had a greater risk of infant mortality and lower birth weight, according to the study.

“One of the main practical conclusions from this finding is that proximity to hog (concentrated animal feeding operations) is important, but it is not the only one factor for this disease risk,” she said.

“If we would like to change something to improve health outcomes in this area, we need to target not only the hog farms per se. We need to target multiple factors, such as an increased number of primary care physicians in these areas and improving access to health care.”

Impact on communities of color

A disproportionate percentage of residents who live around the large intensive hog farms are people of color and low-income residents, said Robert Moore, president of the Duplin County branch of the North Carolina Conference of the NAACP.

Higher percentages of low-income Black residents live within a 1-mile radius of hog farm operations compared with the state and some counties, according to a 2020 environmental justice report from the DEQ.

However, Monroe disputes the findings from the DEQ report. He cited a 2017 study from the N.C. Pork Council. The study found no disproportionate impact on African Americans or other people of color.

The N.C. Pork Council is a nonprofit organization that represents the interests of the state’s pork industry, said Roy Lee Lindsey, the council’s CEO. For every pig sold in North Carolina, the council receives a portion of the proceeds.

“We acknowledge that some farms are located in areas with higher percentages of minorities when compared to the state as a whole,” he said.

“We believe that a comparison with the surrounding communities is a more reasonable standard. The comprehensive data analysis conducted around our farms clearly shows that North Carolina pig farms are not located in poor, minority communities, as has often been alleged.”

“Independent, peer-reviewed science, which N.C. Pork Council’s purchased report is not, and numerous researchers have consistently shown that the hog industry’s primitive waste management practices increase the risk of health harms for everyone living nearby, and disproportionately harm people of color,” Hildebrand said.

“Rather than spending funds on distorting the facts, it’s time for the hog industry to clean up their mess and stop polluting our air and water and making people sick.”

Pollution from the hog farm operations has taken a toll on the community, Moore said. Rarely does anyone swim or fish in the rivers or ponds because of the runoff from the farms.

“It’s not the way it was 30, 40 years ago when you could just randomly find some water and dive in,” he said.

People who live closer to the facilities avoid sitting on their porches because the smell of hog waste is too strong and the flies never stop, according to Moore.

He does not want the hogging industry to leave the counties. He wants Smithfield to be “a good neighbor.”

Sherri White-Williamson, the environmental justice policy director of the N.C. Conservation Network, thinks that DEQ should not have issued the permit in the first place.

She does not think DEQ seriously considered the public’s concerns about health and safety aired at a public hearing that DEQ hosted.

But Sharon Martin, spokesperson for DEQ, said the agency did consider those concerns.

“DEQ staff reviewed the concerns raised by the public and carefully evaluated the permit modifications to address the concerns within the existing authority of the agency and applicable state rules and regulations,” she said.

As part of the modifications, DEQ required two farms to submit reports detailing how they plan to spray waste onto fields to reduce impacts on nearby properties. Additionally, three of the four farms will have to submit quarterly samples of their lagoons to the DEQ.

The permit should require Smithfield to use more advanced, clean technology, as it does in its larger Missouri farms, to further reduce runoff and chemical emissions, said White-Williamson with the N.C. Conservation Network.

The advanced nitrification/denitrification process, or AND, is an effective and proven practice to reduce ammonia, which is one of the biggest contaminants coming out of waste, Sharara said.

“AND systems are rare and reside in less than a dozen farms in the U.S. in Missouri,” Monroe said. “The systems were implemented prior to our acquisition (of Premium Standard Farms).

“Regardless of the technology used, we harvest nitrogen and phosphorus because they are critical nutrients we can utilize in other areas of our operations, such as to fertilize crops.

“It would be inefficient to implement AND systems that use a considerable amount of energy to destroy naturally existing nitrogen when we can safely recycle the nutrients in other ways. If we were to remove nitrogen from the manure, we would end up purchasing nitrogen back through commercial fertilizers.”

The Rev. William J. Barber III, a representative of the North Carolina Poor People’s Campaign, also thinks that the DEQ is not providing any real relief to the communities by granting permits that maintain the status quo of hog farming.

He thinks that the DEQ should be pushing for more advanced technology and more stringent practices in the wake of climate change, particularly hurricanes that hit Eastern North Carolina.

In 2018, heavy rainfall from Hurricane Florence led to 33 hog lagoons overflowing and millions of gallons of hog waste running off.

“It’s unfathomable that in the middle of a climate crisis, where extreme weather events are going to be known to become more frequent and stronger, … DEQ lets permits like this go forth,” Barber said.

If the EPA finds that complaint has merit, it could investigate DEQ’s handling of permits to determine whether it could lead to a disproportionate impact on communities of color.