Posted on October 13, 2021 Categories: Latest News Comments are off for this post 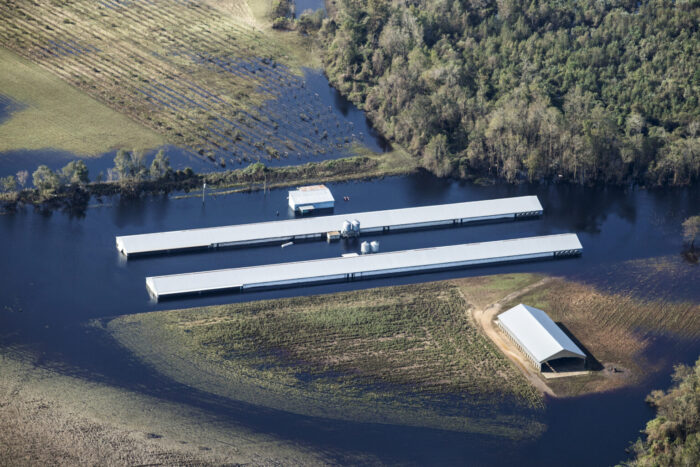 The legislation aimed at regulating North Carolina’s huge and largely unregulated poultry industry seemed modest in scope, requiring commercial chicken farms to submit waste management plans to environmental regulators so the public would know where millions of tons of chicken “litter” ends up.

But as the legislative session in Raleigh came to a close in July, the bill had moved not an inch—and no one was surprised.

“We’re unlikely to see any poultry related legislation passed in the short run,” said state Rep. Graig Meyer, a Democrat and one of the bill’s main sponsors, lamenting the industry’s influence. “We’re in the very early stages of what is likely going to take many years of work.”

Commercial poultry farms produce more waste laden with nitrogen and phosphorus than the state’s massive commercial hog farms but need no operating permits, face no requirement to submit waste management plans to the Department of Environmental Quality and can only be inspected if someone in the community complains about their operations.

Whether the Biden administration can provide some relief to those communities, they say, will be an important test of its commitment to environmental justice.

In addition to greater environmental regulation, the advocates want siting requirements to protect communities of color from greater concentrations of poultry CAFOs, and a moratorium on building new facilities within the so-called 100-year flood plain. The North Carolina Department of Agriculture reported that 4.1 million chickens and turkeys drowned or starved during flooding from Hurricane Florence in September 2018.

Edgar Miller, executive director of the Yadkin Riverkeeper, said the department spent $11 million cleaning up the dead birds after Florence because so many farms had been built in the floodplain

Poultry is the top agricultural industry in North Carolina, which is ranked second highest in poultry production nationally after Georgia. The industry generated nearly $40 billion in 2020, according to North Carolina Poultry Federation, with over 5,700 farms raising more than 500 million chickens and turkeys annually in barns as huge as 40,000 square feet or more.

The state’s poultry boom took off under a regulatory regime that imposes few permitting or oversight requirements on the commercial farms. Under the rule in place since 1993, so-called “dry litter” producing poultry facilities fall under a “deemed permitted” category.

In short, commercial poultry farms can start operating after getting a building permit to construct barns without having to worry about any further requirements from the Department of Environmental Quality, the state agency tasked with regulating swine and “wet” poultry operations, which typically involve egg producing farms at which wastes are sluiced away with water.

The dry litter is used for bedding and typically consists of wood shavings, sawdust, spilled feed and other materials. The litter is often stored in waste pits for later use as cattle feed or fertilizer for crops, making it vulnerable to stormwater runoff and a potent source of groundwater pollution.

With no permitting requirements in place, said Will Hendrick, a lawyer for North Carolina Environmental Justice Network, the DEQ consequently has no information about the location of the poultry farms, bird count or the waste management practices of these facilities—a huge environmental concern given the enormous amounts of dry litter these facilities produce.

Nutrient pollution from nitrogen and phosphorus in animal manure and chemical fertilizers is one of the country’s most widespread and costly environmental problems, causing algae blooms that can kill fish, harm aquatic habitats and sicken humans, due to elevated toxins and bacterial growth.

Increased exposure to these substances can also lead to the deadly blue baby syndrome—a condition in which an infant’s skin turns blue because of the lack of oxygen in the blood.

Medical studies have linked blue baby syndrome—or methemoglobinemia—to use of fertilizers and manure and is most common in farming communities using ground water. The over-application of poultry litter as fertilizer on crops further increases the potential for nutrient runoff into nearby waters.

Hendricks lamented that the DEQ, which is supposed to protect the environment and vulnerable communities from the poultry operations, cannot even evaluate the cumulative impact because environmental regulators don’t know the location of the facilities to begin with.

A Lack of Transparency

North Carolina law expressly forbids sharing information about the poultry operations between state agencies. And while state law requires operators of facilities with 30,000 or more birds to develop and implement waste management plans and maintain three-year records of dry litter produced and dispensed, those records must only be shown to state inspectors on site—and an inspection can only be initiated after a complaint by the impacted community.

By contrast, similar plans prepared for permitted swine, cattle and wet poultry CAFOs must be certified by a technical specialist and submitted to DEQ. Once submitted, these waste management plans become public records subject to disclosure upon request. In the case of poultry operations though, rules favor secrecy.

A provision of state law approved in 2014 requires DEQ to treat investigations of complaints against poultry operations as confidential “until a determination of a violation has occurred.” In 2017, three community organizations—the Waterkeeper Alliance, the North Carolina Environmental Justice Network and the Cape Fear River Watch—sued the DEQ over the lack of transparency in the investigation of complaints and inspections.

A settlement was reached in which DEQ agreed to improve the procedure for handling complaints so that regular updates to the public are provided in accordance with the law. But the plaintiffs say not much has changed since.

“Complaints are sometimes submitted without the complainant even knowing if the investigation occurred at all, much less if any information was collected from the poultry operation regarding the complaint submitted,” said Larry Baldwin, North Carolina CAFO coordinator for Waterkeeper Alliance. He added that only in very rare instances has the agency informed the complainant how its investigation was concluded.

“The second reason these records are kept from the public is because waste management records are only kept on site,” Will Hendrick explained. “And unless the agency receives the records and makes this formal finding of determination, the records in question will not be accessible to the public under the North Carolina Public Records Act,” he concluded.

These environmental justice activists lament that, even though these records are critical in evaluating the conduct of poultry operations, they are almost never made available for review by the public, academia or even regulators whose job is to protect the communities from these kinds of operations.

Josh Kastrinsky, a public information officer for the DEQ, said that “complaints against “agricultural operations,” and all other records accumulated in conjunction with the investigation of these complaints, are considered confidential records unless and until a determination of a violation has occurred.”

He added: “We do make available information on complaints that are substantiated by staff investigation, and we provide summaries of complaint data on our website.”

A Concentration in Economically Distressed Communities

Duplin and Sampson counties have seen enormous growth in poultry operations in recent years, with 15 million and 11 million birds respectively in 2014, according to state figures.

A 2020 report by the Environmental Working Group (EWG), a national nonprofit, found that Duplin, Sampson and Robeson counties together produced 1 million tons of poultry a year.

The poultry operations are also a constant source of nauseating odor pollution, which affects property values of the neighboring communities, increased truck traffic and other types of harm, according to a 2020 report by the nonprofit Environmental Integrity Project.

In case of Duplin, Sampson and Robeson counties, most residents are non-white, with nearly double the state’s average of communities of color, census data shows.

The acute lack of regulation and oversight in these economically distressed North Carolina counties have led to mounds of manure, called dry poultry waste, dumped in open sites despite a legal provision that prohibits such storage for more than 15 days without cover. The state acknowledges that, compared to cattle and swine manure, which is applied to the fields close to where it was generated, dry poultry litter is hauled much farther for use as fertilizer and is hard to track.

Kastrinsky, the DEQ public information officer, said that state regulations outline requirements for facilities’ litter stockpile location and timespan for stored waste, “and the department investigates violations of those rules.”

While state law requires that haulers moving over 100 tons of poultry waste a year must report the activity to DEQ’s Department of Water Resources (DWR), the department says it lacks the capacity to verify waste management practices.

In a report on improving water quality, the DWR concluded that only a small portion of poultry litter data was reported to DWR and much of the reporting was incomplete. This was especially true in Sampson and Duplin counties, the leading poultry producers.

“The litter is very much an afterthought in this system of agriculture farming,” said Sally Lee, deputy director of rural partnerships at the Food Integrity Campaign. Lee said that dry poultry litter is considered free fertilizer that has nutritional value and should reduce farmers’ costs of operation.

“But in many ways, it winds up being a liability because there’s simply not enough cropland or acreage available to apply industrial scale quantities of poultry litter,” Lee said. “Farms keep getting bigger, and more bird populations produce even more waste. That’s where farmers are potentially incentivized to do the wrong thing, which is to pile it up, and, and really just forget about it.”

The threat posed by these waste piles is magnified by climate-amplified hurricanes and the ensuing flooding. A 2020 study by Clean Water for North Carolina found that vulnerable communities will be exposed to similar disasters even more often as hurricane seasons become longer and rainfall intensity increases because of climate change.

Christian Breen, a field investigator with the nonprofit Waterkeeper Alliance, led the project that mapped out concentrations of cattle, swine and poultry operations across North Carolina and their proximity to Black, Latinx and Native American communities.

He said no one had ever mapped out where these facilities actually are, and how close they are to existing hog facilities. “When combined with the hog facilities located close to poultry facilities, and high water-table in North Carolina, it exacerbates the problem of water pollution as highly concentrated pollutants enter the waterways on a regular basis,” Breen said.